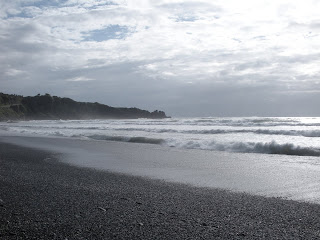 I met everyone but one at the hotel lobby this morning. Everyone seems very nice. Our guides showed up at 10:30. M., our main guide is from Auckland and now lives near Christchurch, and S. who helps him out and does most of the shopping and cooking. She’s originally from Austria, and now lives near Christchurch as well. We have our own little bus thing with a small trailer attached where they keep all our food supplies and whatnot. So we were waiting on our last person. We were told to meet at the lobby of the Copthorne hotel; well there are three Copthorne Hotels in Christchurch. So our guides check all of them. They then drove us out to the airport to the “Antarctic Center” which was the place to meet if you had flown in that morning. And low and behold, there she was sipping coffee. They loaded her up and off we went. There is enough room on our little bus for everyone to have their own row and then some. Our guides provide yummy snacks of fruits, granola bars, and other snacky things and books on plants and animals and history. M. drives like a Kiwi. Fast. We headed west and our first stop was a short hike around Kura Tawhiti. I know this because I took a picture of the sign, but I already forgot the enligh name (Castle Hill). It is a limestone formation on the eastern slopes of the Southern Alps. And it is also the location where they shot the first Narnia movie, The Lion, The Witch, and The Wardrobe, specifically the final battle scene. Also, some scenes from the LOTR: The Two Towers was filmed here, specifically where Aragon, Legolas, and Gimli are surrounded by the Riders of Rohan and where Viggo Mortenson broke his toe while kicking an orc head. I asked about the possum clothing thing and a whole discussion broke out about how great possum is for clothing. It is mixed with alpine sheep wool (merino) because their wool is finer and it is suppose to be great because it keeps you cool when it’s hot and warm when it’s cold and doesn’t smell like wool even after you get wet or sweat in it for days on end.

Our next stop was Arthur’s Pass and the Devils Punchbowl. Here there is a ranger station, it’s called a DOC Station (Department of Conservation), but it’s the same thing. You go inside and they sell all sorts of stuff from kiwi playing cards, clothing, maps, trinkets, and possum pelts. You can also learn about the history of the area from displays and such. The possums here look nothing like they do in the states. But they are an invasive species that is wreaking havoc on the bird populations and such. So they have tried everything to try and stop its growth. So you are allowed to swerve to hit one with your car. We had lunch here and then took a short walk to see the Devils Punchbowl waterfall. It was raining a bit but it wasn’t bad. We then headed all the way to the west coast and the Tasman Sea. According to M., the people who live here are “just different”. The sea is beautiful. We made it to Punakaiki and checked into our lodging. They are bungalows right on the beach! They are very nice, full kitchens and bathrooms, and little patios. Wow. I strolled along the beach (mostly rocks – a rock skippers paradise), mostly limestone rocks. I saw some marine fossils (shells) and picked up two rocks for the nephews. That’s what they said they wanted: so easy. We then went and had dinner at a café owned and run by the “biggest bushiest eyebrows you have ever seen”. He is only open for lunch, but M. and REI have an arrangement, so he makes us dinner. Sweet. We had fish n’ chips. I know I don’t eat fish, but I liked it. I also got the free beer because I was the prettiest. Woo Hoo. It was good too. Every area has their own beers. So this was the West Coast’s beer, Speight's Dark Ale or something like that. After dinner we walked across the street to the “Pancake Rock’s”, which are another limestone formation that really does look like a huge stack of pancakes. Very beautiful here.

Things I have learned today… that I can remember:
1. M. is a Jafa, which stands for Just Another Friendly (or rather that other F sounding word) Aucklander. Which is what south islanders call most north islanders.
2. The kiwi bird is a lot bigger than I thought. They are bigger than chickens, and completely flightless. A lot of birds here are flightless because before Europeans came, there were no mammals. Absolutely no mammals except 2 species of bats. So a lot of birds got their food on land, so why fly?
3. The largest (and only) Alpine Parrot lives here; it is also the smartest parrot species in the world. They love to chew on rubber, so you will see them eating cars, bikes, anything with rubber. We saw two knawing on a Volvo. S. said she found one in our trailer when she was packing it back up after lunch.
4. There are more people living in Auckland City than there are on the entire south island.
5. The average rainfall per year on the west coast is 10 meters! That’s roughly 32 feet.
6. The Tasman Sea tastes saltier than the Pacific Ocean, to me anyway.
7. There are sand flies here. Nasty little buggers, but if there are sand flies, there won’t be mosquitoes. They are just as annoying though. Swarm and bite all the same.
8. It doesn’t get dark here till after 9:00pm. I’m not used to that.
9. Toilets don’t flush clockwise or counter-clockwise, they flush straight down and with a vengeance too. I don’t think either nephew could clog these puppies up.
10. And finally, “Kick the Tires” means I need to use the toilet.