Meanwhile back at the ranch 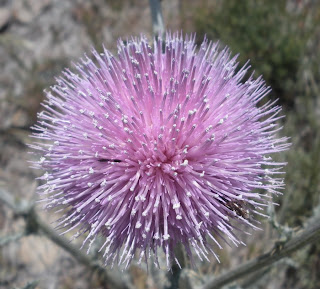 I’m here in the California desert. Outside of Lancaster and Palmdale (yes, I said Palmdale). The wildflower season was at its peek last week, but it is still quite beautiful and amazing. There are still poppies everywhere, but they are on their last hurray. I’m down here for a ten-day rotation, surveying dirt roads and soon to be dirt roads that will access a new power transmission line (those big steel towers) that will of coarse go to feed Los Angeles. But at least it is wind power; they are bringing power from a wind farm in Tehachapi.

It is only day four, have six more to go. But I have already seen some pretty cool stuff. Tomorrow will be the “jaw dropping” day. We will be visiting and mapping and whatnot at this HUGE village site. It spans more than three miles!!! WOO HOO. Lots of cool things to see.

Here is what I have seen so far… lots of wildflowers, poppies, thistle, linear golden bush, blue dicks (I kid you not, that is there name), forget-me-nots, chia, and many many others. My survey buddy is a botanical nut, so I keep asking her, “what’s this?” 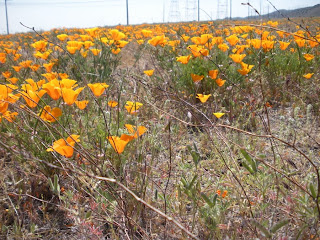 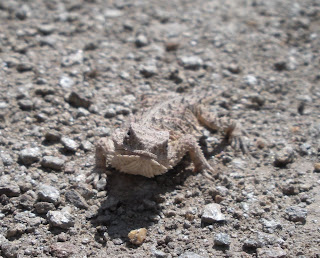 The days have been going by fast. The hikes are not too bad. We are in the high desert, so the wind blows constantly (which is good and bad). Good because it keeps the temperatures down, and bad because it keeps the temperatures down. HA! It’s cold in the mornings and evenings, and hot during the day. But this is a good time to visit the desert, not too hot. It will get into the 90’s this weekend, but that isn’t too bad.

Two things I have noticed. Way to many people are moving into the desert. Lancaster and Palmdale blend into each other now. No distinction between the two cities. Suburban sprawl is killing the desert. And there is garbage EVERYWHERE!!!!! People have no respect for the desert; they just drive their crap out there and dump it!!!! WTF? (sorry, really irks me). It is so sad! I usually try to pick up trash I see, but you can’t do that out here unless you have a dump truck following you. My survey buddy and I did pick up some stuff today; someone had dumped chlorine tablets, (you know – urinal cakes). Those are toxic!!!!!!! We put them in a plastic garbage bag I had in my pack and took them to a dumpster. How hard it is to dump stuff in a dumpster. Lazy bastards.

Other than that little rant, I’m having a great time. Wish I had a better internet connection but, oh well. We will see if I can get this to post tonight. Here’s hoping!
Posted by The Lonely Traveler at 8:33 PM 1 comment: