I don’t wanna get up! 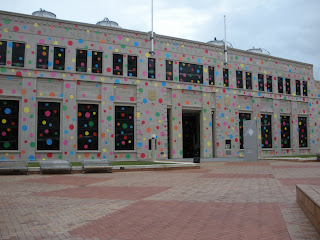 Today I went to Wellington, the capital. I got up at 4:30am, to meet my shuttle to take me to the airport. My flight left at 7:00am, and I arrived at the Wellington airport at 8:10am. Man was that early. Too early. Ugh. What is pretty cool is that the entire check-in system in Auckland for domestic travels is automated. You go to the kiosk, type in your confirmation code, out pops your boarding pass. If you have check in luggage, you put it on the scale, and out pops your luggage tag. You put it on, then place your bag on the rolly machine thingy and off you go to your gate.

I took the bus to the closest stop to my hotel, and hoped I wasn’t too early to check in. I wasn’t. I went up to my room, and crashed for 2 hours.

I got up at 11:30am and headed out to see Wellington. It is WINDY!!!!!! Holy crap! But it remained dry almost the entire day. If you like shopping then this is the place. I had lofty goals when I set out. I wanted to see the Parliament buildings (The Beehive), and the Oriental Parade (the beach), and the Weta Workshop (where all the stuff from Lord of The Rings were made). But only made it to Civic Square which houses some parliament buildings, the National Library, which is decorated in poke-a-dots. I’m serious! I walked the waterfront around the harbor to the Te Papa (The National Museum of New Zealand) This place rocks! It’s FREE!! There are 6 floors of awesome stuff. From sculptures, paintings, tons of Maori and European history, and natural stuff like plants, animals, the Largest Giant Squid on display (their claim to fame), fossils, landforms, etc. The south island has a major fault line running straight through it. Part of the island is on the Pacific Plate and the other half is on the Australian Plate. Huh. The museum is very hands on, great for kids. Lots of things to touch and play with. There are also exhibits that you have to pay for, such as the Pompeii Exhibit that is touring here right now, and there are also rides you take, yes amusement park type rides, but you have to pay for those as well.

After the 6 floors of awesome I walked a little farther down towards the Oriental coast, but it was crazy windy and I was tired. So I turned around and went back. There was some Go Wellington Bus (the local public transportation) thing going on in a park. They had one bus where the entire side was cut out and made into a stage, and another bus where they were letting people spray-paint it.

I got back to the hotel just in time for it to start raining. I hope this doesn’t become a theme. I got to my room by 3:45pm. Still plenty of time to go see something else, but I’m exhausted. Sucks. Oh well. I think I’ll order room service tonight. I’ve never done that!

Tomorrow I will be taking the Inter-Island Cruise ship to the south island (Picton), and then the TransCoastal Train to Christchurch. This will take all day. Then the next day will be the first day of the REI portion of the trip! I hope it doesn’t rain. It’s supposed to be SUMMER!