To My Mom: Part II the road trip edition

My mom LOVED road trips. And I'm not kidding at all. It was in her blood. She would get itchy. There was a need to get out on the road. To get out of the house. Away from the familiar.

To have an adventure.

Perhaps this is in my head because my father just wrote about their (my mom and dad's) last epic road trip which was her road trip with cancer. You made me cry dad, that was quite the epic adventurous road trip.

Along the lines of what I wrote in Part I, I also inherited that gene. I LOVE road trips. I need them. I itch. I crave. And I need one, RIGHT NOW. It's in the works, (a small one). It better be in the works, you know who you are, boo!

But Mom's road trips were epic. I'm glad I was included in some of them. Not like I had any choice in the matter. I, along with my brother, would be pulled out of school for weeks at a time, and we'd get in the car, and off we went.

Dad wasn't on these trips. Dad would take us camping every summer, and mom would take us on epic road trips. Perhaps I'm using epic too much, but they were epic. Especially to an 8-year old, who got to leave school a month early.

There were lots of road trips. Mom and dad would pile all three of us kids in the back of a car with sleeping bags in the wee hours of the morning and we'd wake up in Nevada on our almost yearly summer trip to Wyoming. But there are two trips that I remember quite well.
She took us north in 1985. I got to see snow for the first time. 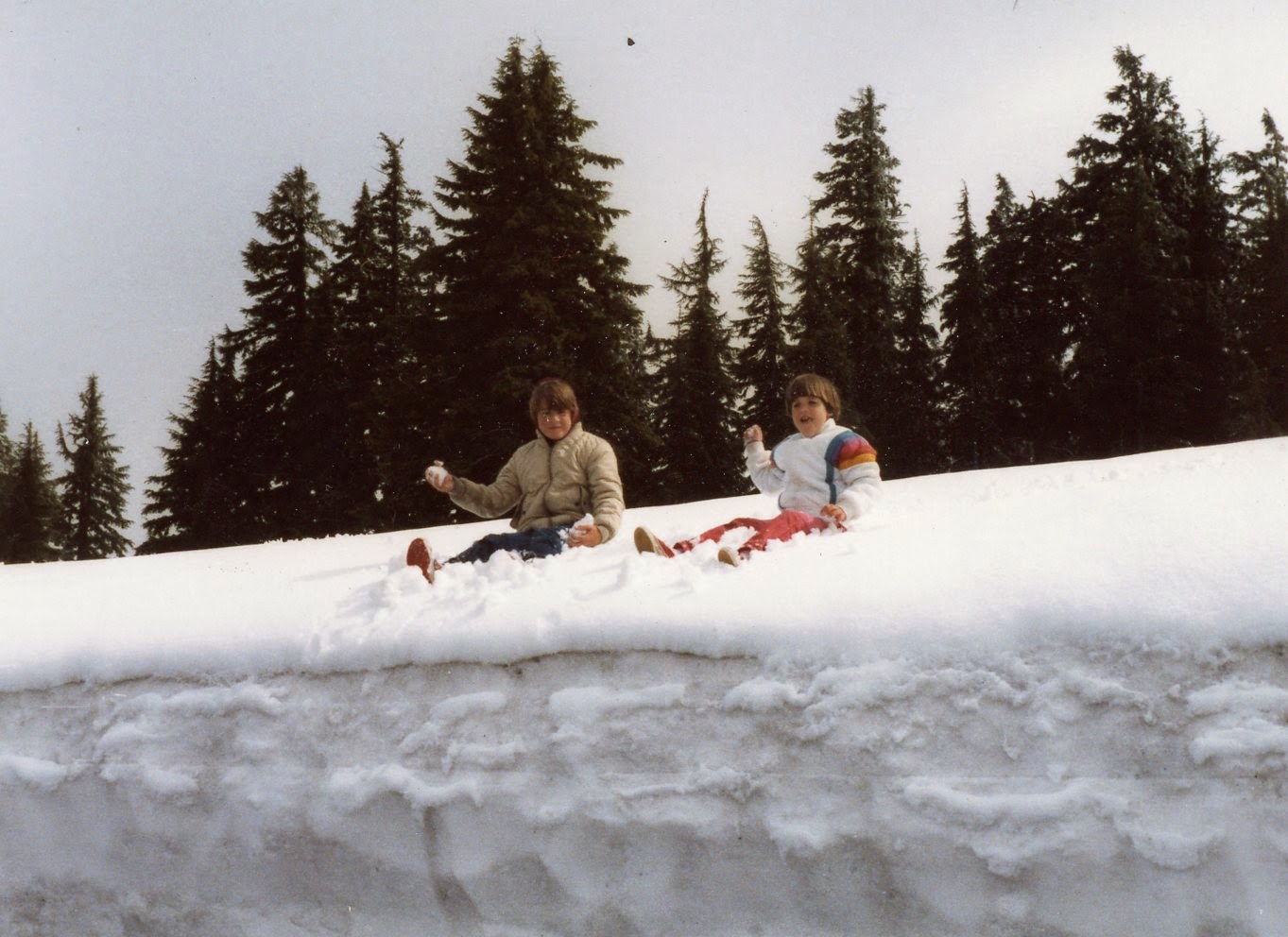 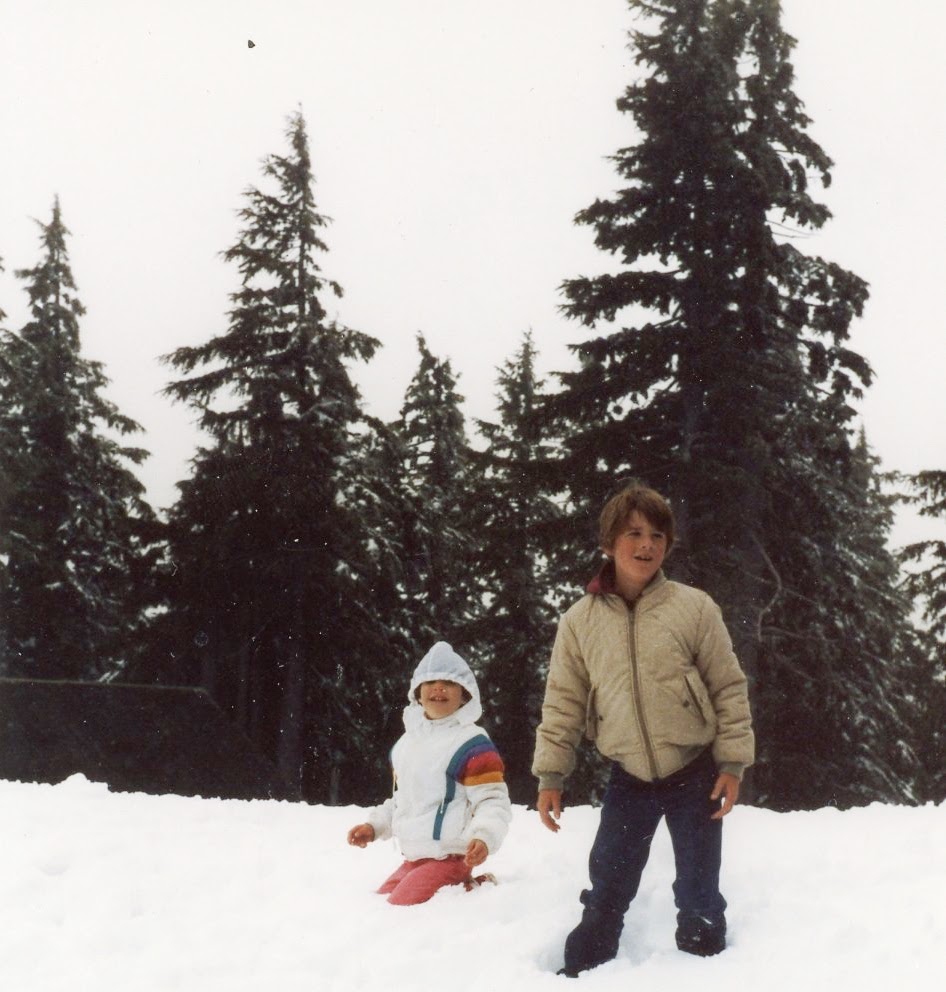 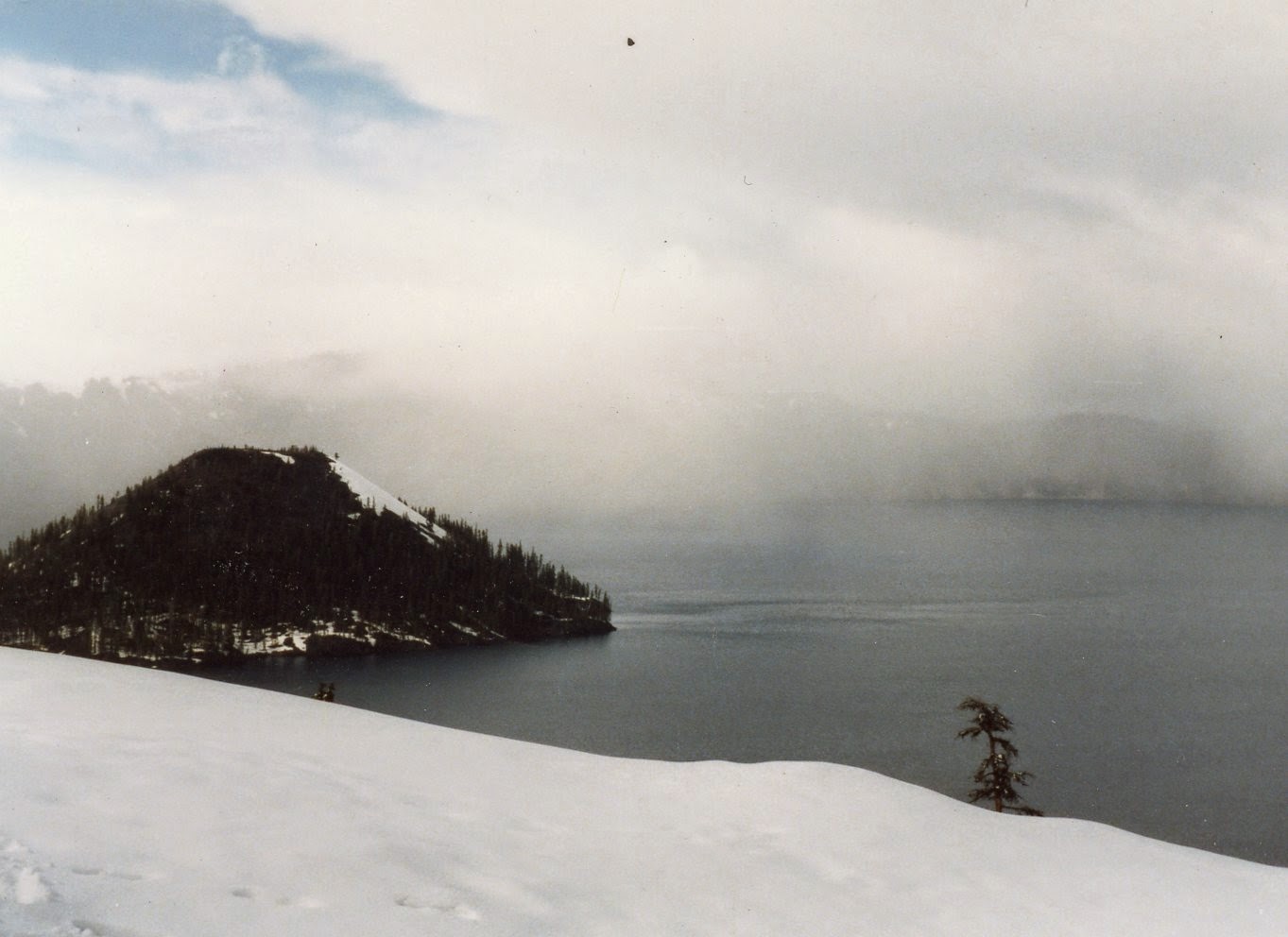 She stopped, and I got to scoop up ash from Mt. Saint Helens along the side of the highway. I rowed in a boat for the first time (that I actually remember) in Oregon. 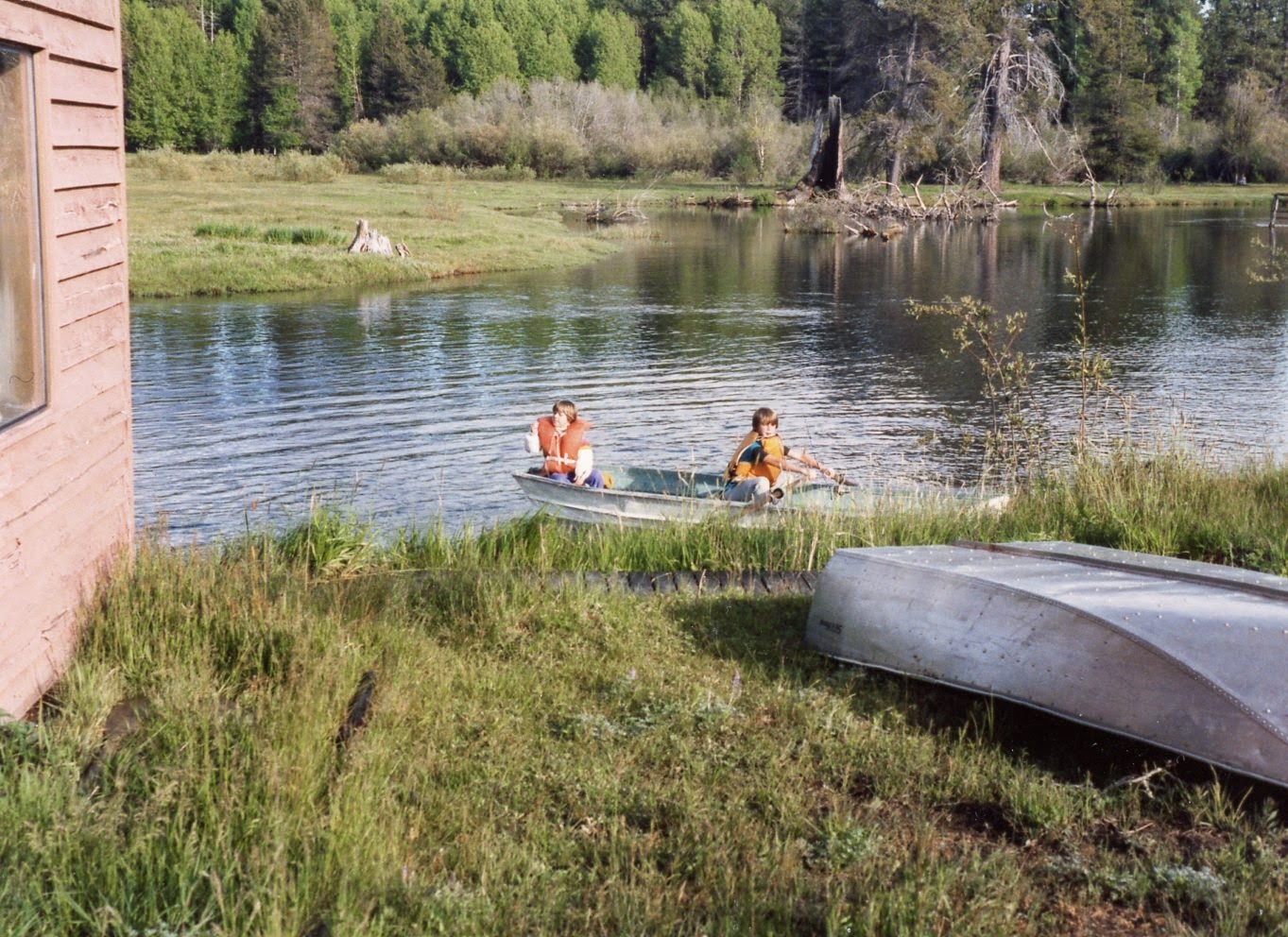 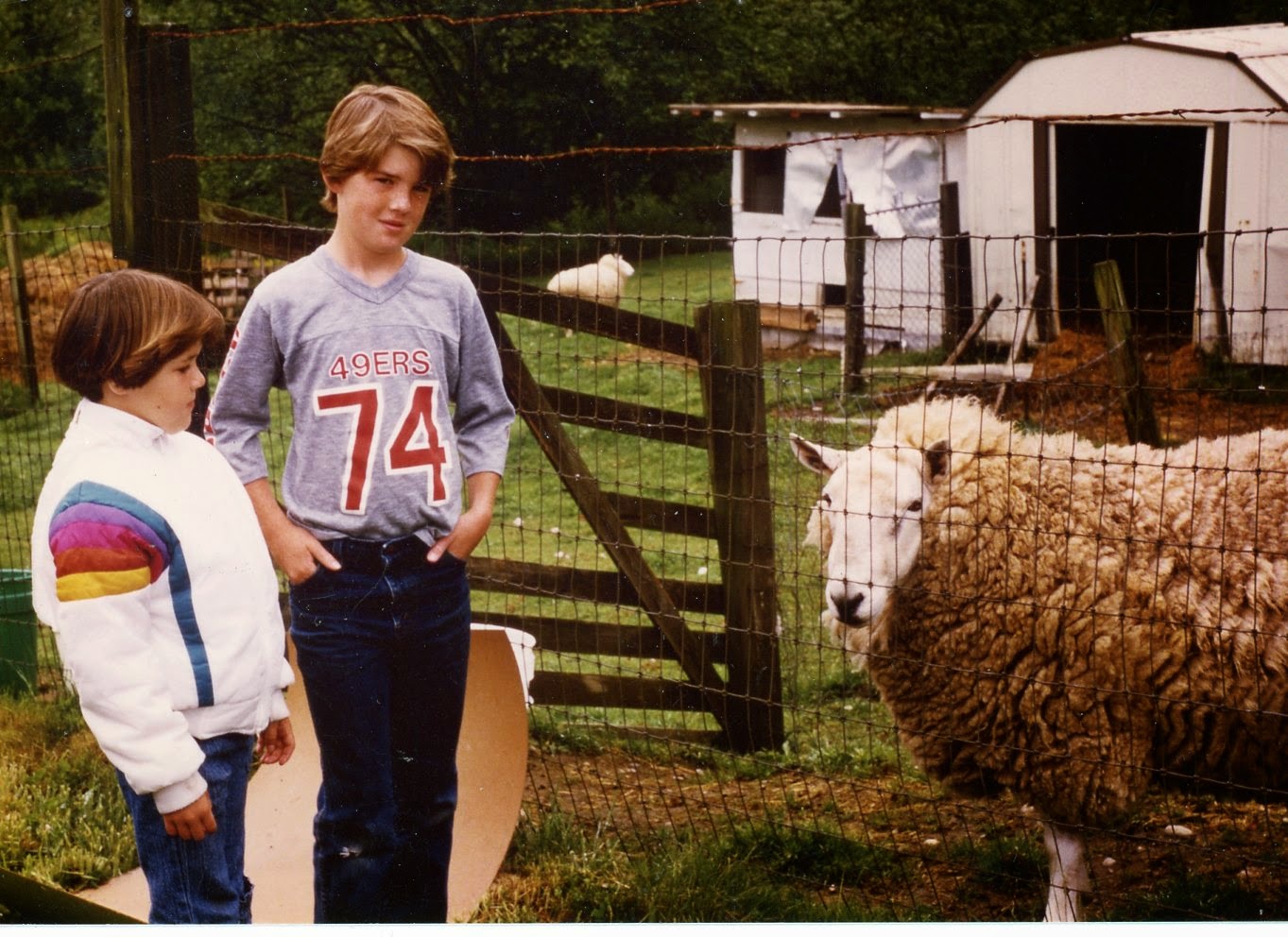 She took us east in 1989. She drove us south through California, through Arizona, (we did stop at the Grand Canyon, brother, I found pictures to prove it) New Mexico, Texas, and Oklahoma to Arkansas. To Grandpa Perk's Ranch (her father). 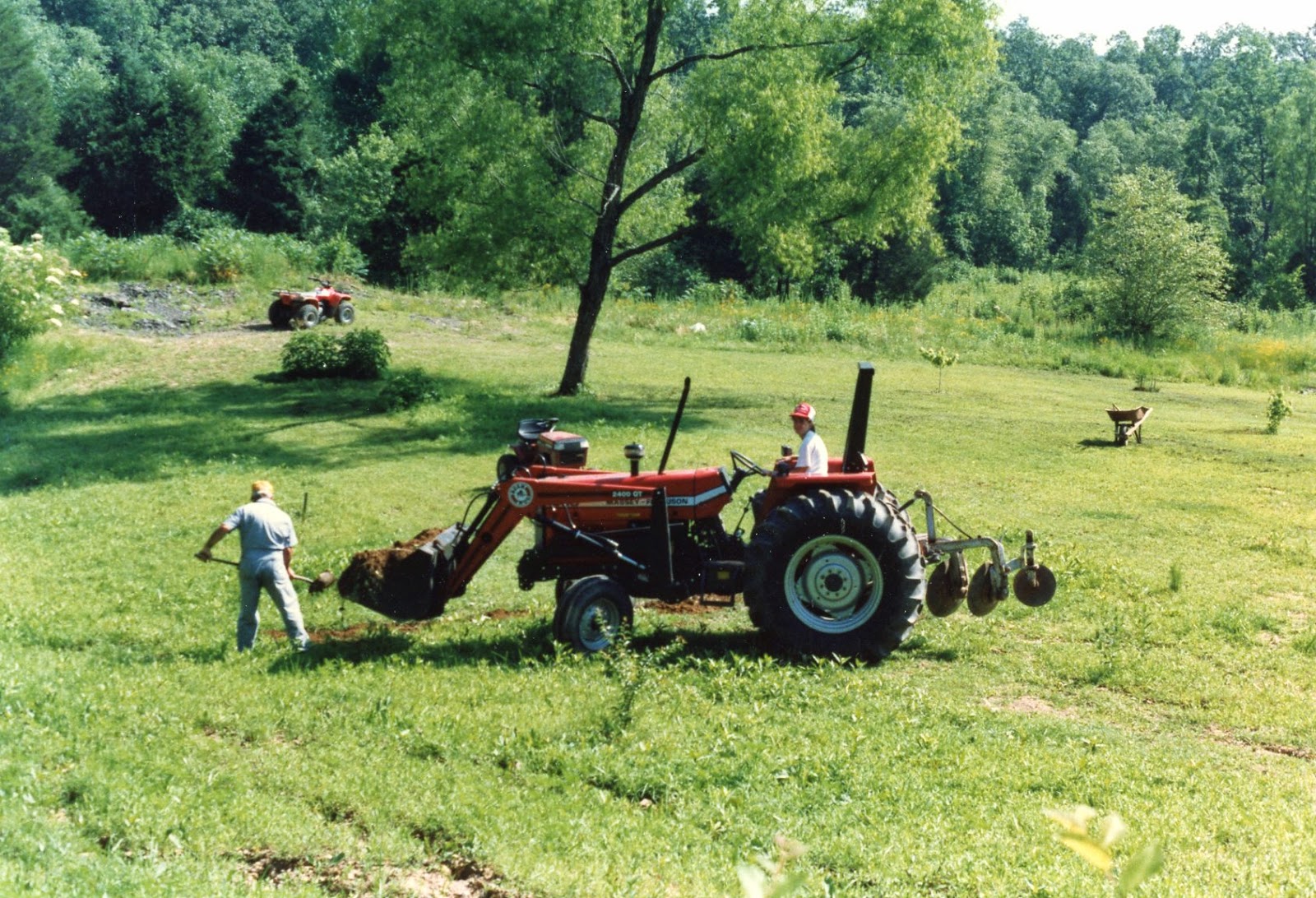 I met cousins, aunts, uncles, 2nd, 3rd, 4th cousins and I don't know how you're related but you are.
Learned a new game of cow pucky fights via 4-wheelers. Mom would have to hose us down in the yard. From Arkansas she took us north. Through Missouri and Iowa to Minnesota to a Larsen family reunion. Where I got to float down a river in an innertube and watch my brother and other cousins pee on Wisconsin. 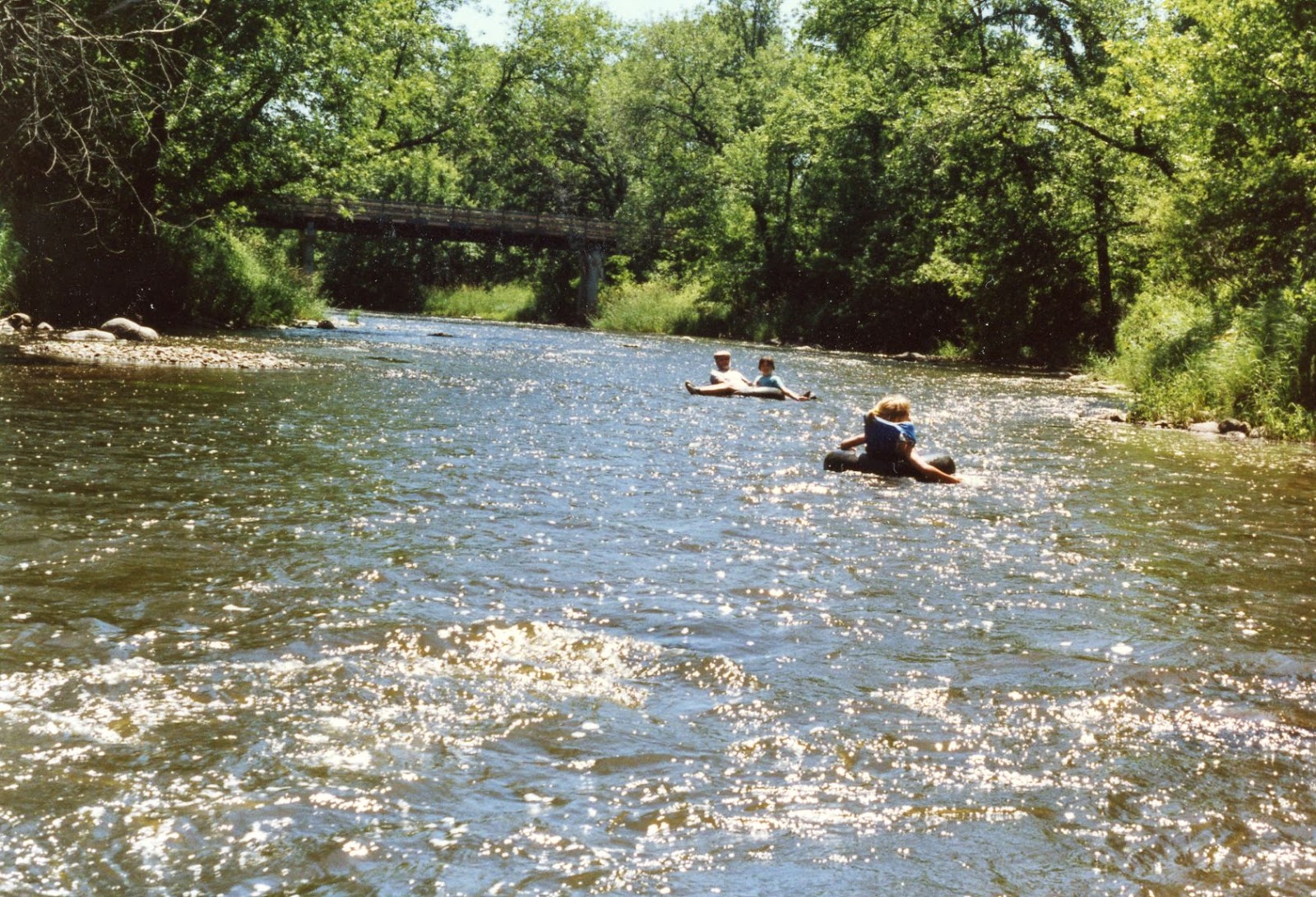 Watch my grandparents dance. See June bugs. Oh and see my dad after a month or so.
She then decided that after the reunion that we should take a detour... around Lake Superior before driving back down. "It won't take that long", she said.
Well, we can tell you, they don't call it Lake Superior for it being so small. I got to spend my first night in a foreign country, by the name of Canada that trip. I saw Canadian money for the first time and drank a Canadian coke. And for the first time on this long trip, I got my own hotel bed. I didn't sleep with my mom that night. We saw Lake Superior, from all sides. It's a big lake. Somehow we ended up in Ohio. Where family friends were and their twin daughters put my hair in such tight pig-tales that I got a headache. 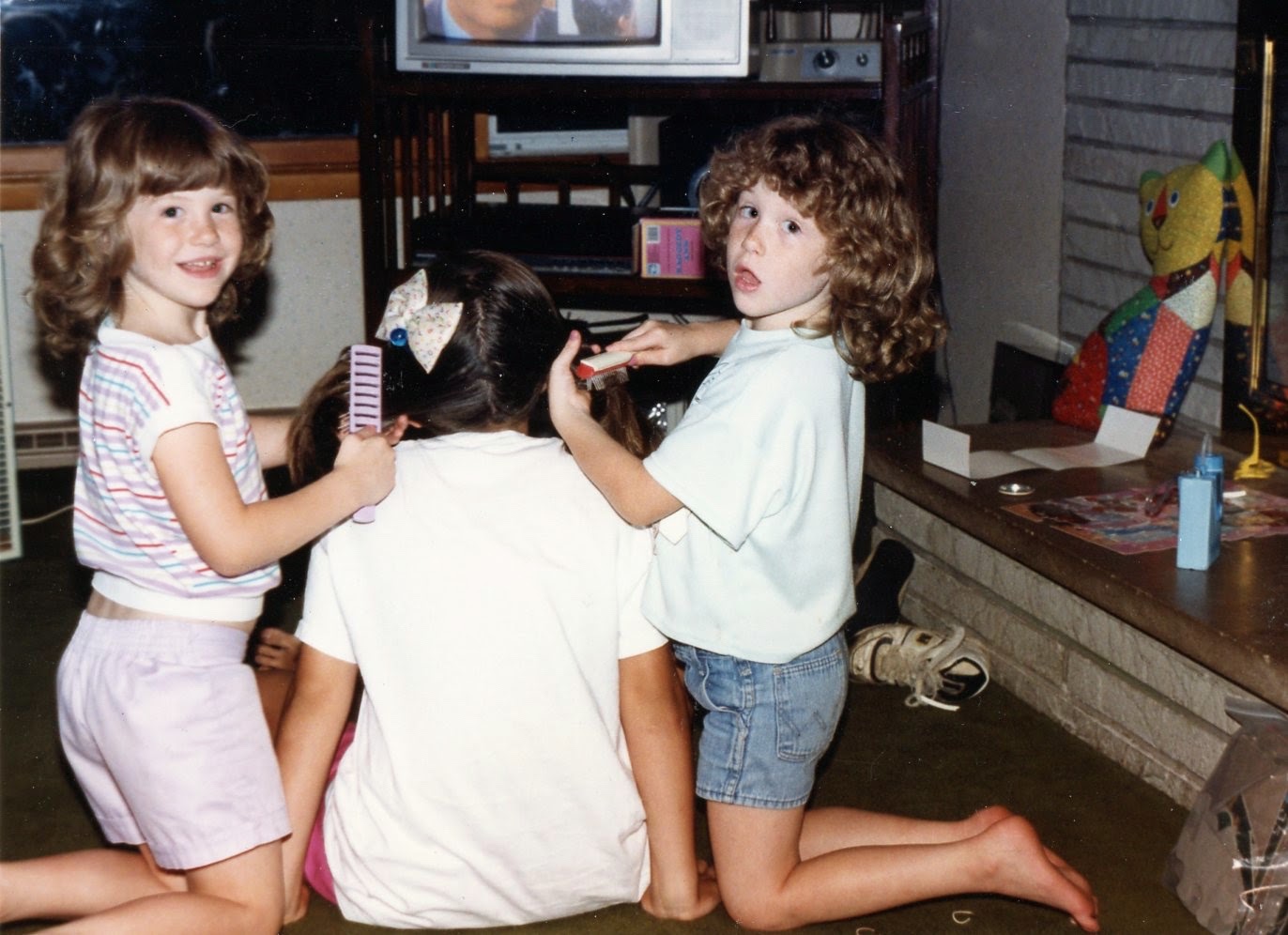 But I also saw fireflies for the first time.

From Ohio, she drove us back south to Grandpa Perk's in Arkansas for a bit, and then northwest to Wyoming to the Larsen stronghold in Cheyenne, then finally back home to California.

So now maybe you can see why I call her road trips epic. Especially to a kid. She did all the driving. There are a lot of stories we could tell. My brother has quite a few regarding our Grandpa Perk, for sure. But they are his to tell.

It was a lot of miles in the car with mom. We'd listen to tapes. The Carpenters, Beach Boys, and The Nylons were ones I remember. We'd wear the tapes out till they started to warp. And we'd sing the miles away. I'm sure there were boring parts (Nevada and Oklahoma ring a bell) but I don't remember being bored in the car with mom and my brother.

She was truly happy on the road. There was a mischievousness to her and a true sense of adventure. We could go anywhere we wanted, and we did.

When I was a practicing archaeologist, this need of road tripping was satiated. I was traveling. I was on the road. Some places were not so fun, but others were great. I saw things and places that I'd never seen before. I got to explore the Sierra Mountains, Eastern California (Lone Pine), the Mohave Dessert, etc. Now that I'm not a traveling shovel bum, the need isn't being met regularly.

Mom had an epic road trip planned. She and dad were going to leave for it 3 days after she got her cancer diagnosis. They never got to do it. Instead she went on her final epic road trip of doctor's appointments, chemo and radiation treatments, and surgeries. No one thought it would be her last road trip. It shouldn't have been. But she was a trooper. She was adventurous. She was mischievous. She made the most of her last road trip.

I am determined to continue the tradition. For her, in memory, and for myself. Because it is in me. The need. The itch. I have to go. Somewhere. The force is strong in this padowan.

I'll see you on the road, mom. I'll belt out the harmony to your melody.

To My Mom: Part I

I've been avoiding this blog like ebola. But it is time. I got the headphones on. Music is playing. No more excuses. So without further ado, here is the first of probably many posts about my mom.

Here she is at age 18, a freshman at Northwest Nazarene College in Nampa Idaho. 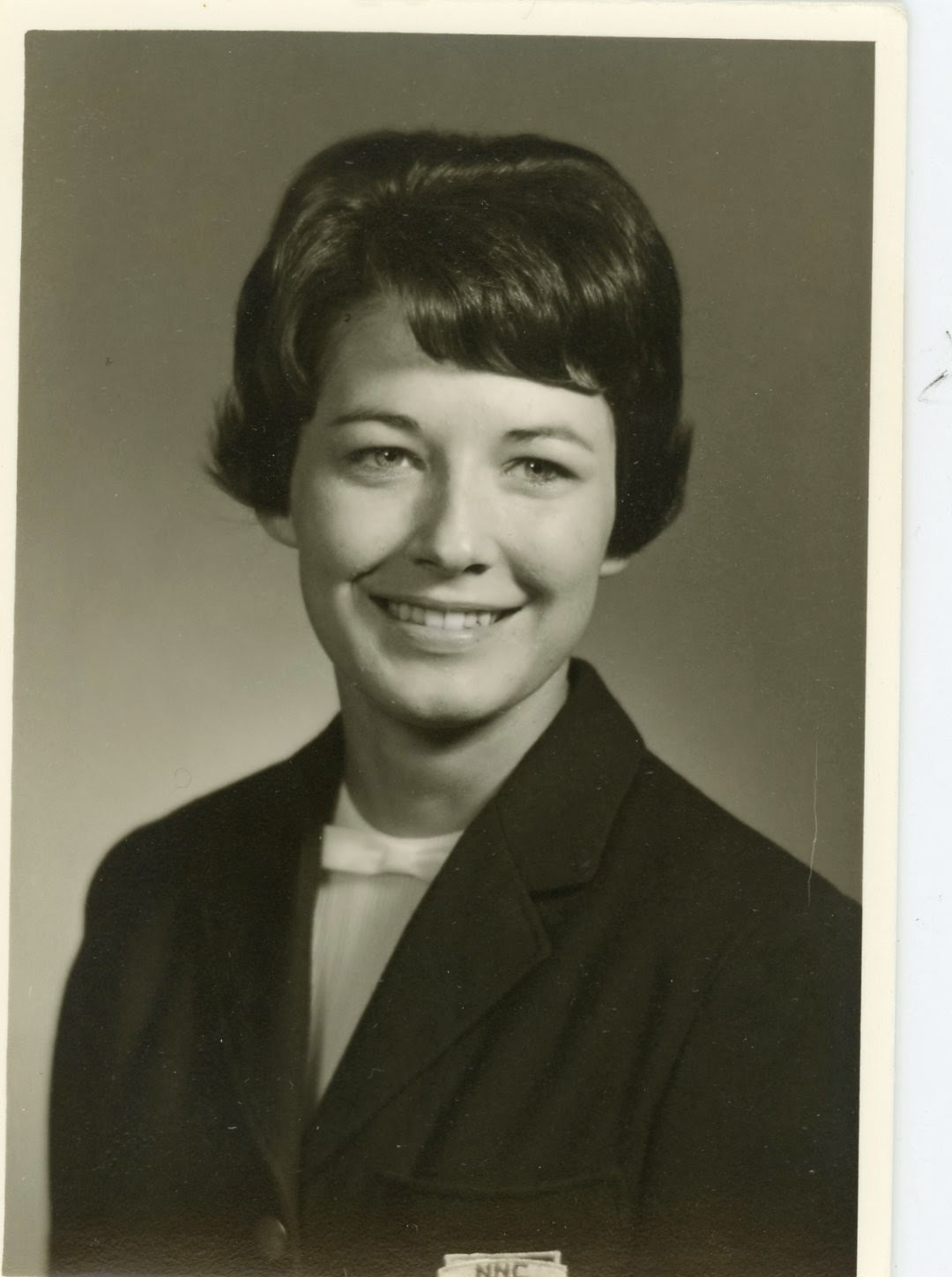 After my mom's memorial service, people commented on how much I really look like her.  I always knew I took after my mom, more so than my father. But then all these people kept saying, "Wow, you look so much like her, I never realized". Well, neither did I. I do now.

I have her hair, widows peak included. Freckles, nose, smile, eyes (except in color - I got the recessive gene from both parents to turn mine green), body type, height, and hands. Internal things as well, but we won't go into that. I always knew I took after her especially after puberty. That's when you really start to notice things.

During those fun times of puberty and after in high school and later in my 20's, I did not like that I took after her. And not just in looks and appearance. I was never comfortable with my looks, or my body. I didn't like that I have a widows peak, or a round face, and short stature, or that weight is always an issue of loosing. I hated it. I was so self conscious, that I was too scared to even talk to a guy that I liked. I never "dated", didn't have boyfriends. One in college, but we won't talk about that here, not important to the story.

I think I even resented her for it. I was adamant not to ever have children, because I didn't want to pass on what I had inherited from her. How bad is that? I wanted to be more like my sister. She was tall, and slender, had a more outgoing personality. I thought she was pretty (she still is, by the way). She took after my dad. She looked like my dad's sisters, my Aunts.

I'm in my mid 30's now and still working through many of these things. But I am so proud, grateful, lucky, and did I say stinking proud to be carrying my mom in me. In my face, smile, eyes, humor, in every way possible. Especially now that she is gone. And I am so thankful that I realized this before she left us. I may not have told her this specifically, but I think she saw this change in me. The change from hate to acceptance to pride and love.


She was beautiful, inside and out. 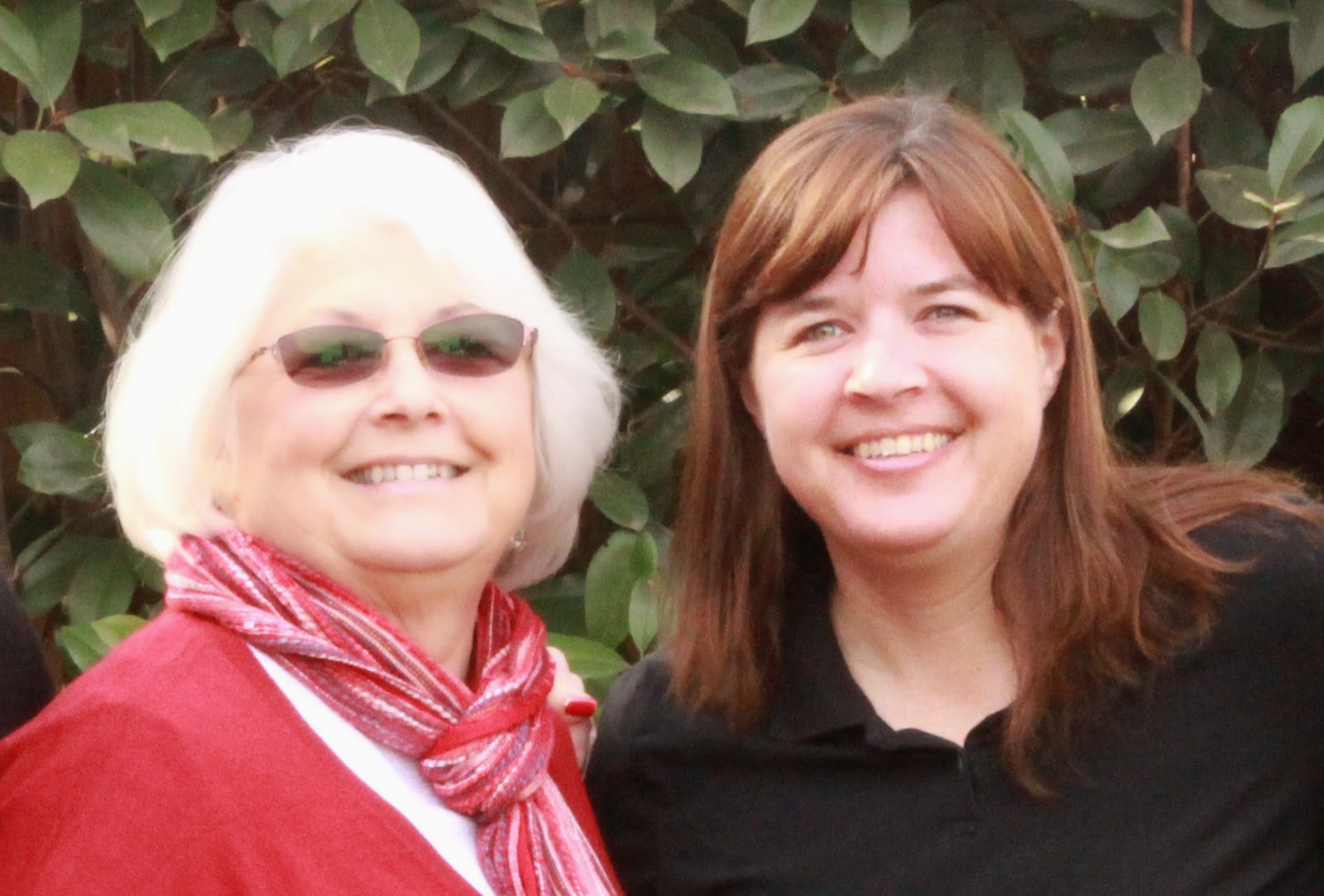