It’s cold… but it’s so pretty 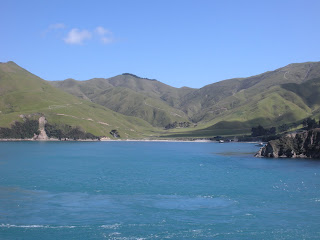 Today was a relaxing day of sitting on my ass. The morning was a bit hectic, but it all worked out… or soon will. So I used 1800HOTELS.com to book my room in Wellington, and well the hotel doesn’t recognize them or whatever. So I ended up paying for it again. I will try my darndist to get my money back from the website. So for the future, I recommend not to use that website. I figured out what bus I needed to take to get me to the Interislander Terminal where my ship was waiting. I got on the bus and the guy says, I don’t go there; you have to go to the train station where there is an Interislander bus, which you take to the ship. Oh crap. He says he’ll take me to the train station. He was nice and told me exactly were I needed to go and what platform I needed to be at. So it worked out but man it was five bucks to go maybe 10 blocks. Ouch. Then it was another 2 dollars for the bus to the ship.

The ship is BIG. 10 decks, and two decks just for cars. I spent most of my time on the 10th deck, which they call the “Sun Deck”. It’s basically the roof of the ship with chairs and viewing areas. I was up there in the cold and wind because if I’m outside and can see, I don’t get sick. I did go down below for a bit because I was getting too cold. But once we got to the fjords, I just had to be outside to see them. Plus by then it had warmed up. Here are some pics: 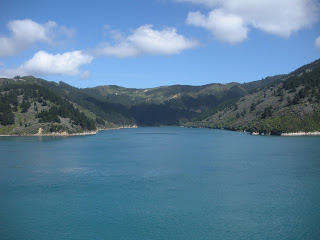 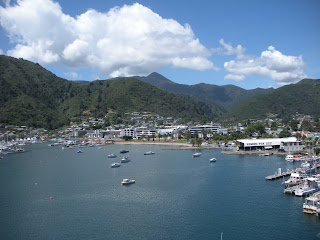 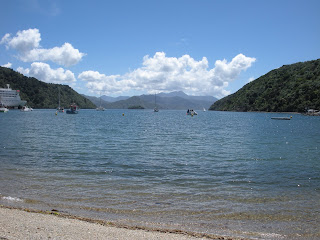 
A view from the waterfront at Picton


I had an hour before I had to be on the train. So I sat on the shore for a while and made friends with a sea bird and some ducks, then went to Subway to get lunch. I know, I know, I’m in a foreign country and I eat at Subway? Here’s my reasoning: I haven’t been eating much of anything, that’s what happened when you leave a Larsen on their own with no one to make decisions for them, and I needed something familiar, so there. Well, all the choices of meats and extra’s are all the same but the meats themselves are different. I had a turkey sandwich and it was dark meat. I had no idea they made dark meat turkey slices. So it wasn’t quite familiar after all.

I got a seat all to myself on the train and facing the right direction, which was fabulous. Unfortunately I was on the inland side and not the coast side of the train. But since I had a seat all to myself, all I had to do was stand up to see out the coast side. It was pretty. Lots and lots and lots of sheep. I took a short video, just for you sis! I believe the route I took, the Tranzcoastal is the least popular. The most popular is the Trazalpine, which leaves from Christchurch on the south island and goes into the Southern Alps. Supposedly spectacular views!

So the ferry The Interislander was about 3 hours, and the Tranzcoastal Train was about 5 hours. So now I am at the hotel in Christchurch, doing laundry at 9pm. Tomorrow morning I meet the REI folks, and off we go on a hiking and kayaking adventure. I will not have internet access for much of this part of the trip, so my blogging will be sparse from here on out.

Note: Noir, you would love it here, in the bigger cities. Auckland and Wellington. So many shoe stores so little time.
Sis, they DO make and sell possum clothing. I saw a sign!
I’m glad I came early on this trip. If I had arrived the day before the REI part of the trip, I would have been miserable the first 3 days. It took me 3 days to get the system back in check. I finally feel ready for fun. Yesterday and last night I had a bad sore throat, and I went to bed at 7pm last night. Today the throat is almost completely healed, yay!

I am now ready to be awed.