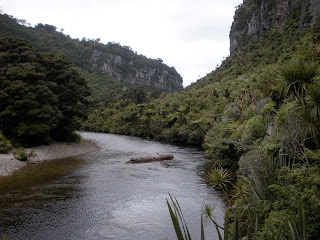 M. and S. made pancakes this morning in honor of being near Pancake Rocks. Delicious. We then headed out and started our first hike of the day, which started at the beach in front of our bungalows. The Inland Pack Track. M. said it was a 3-4 hour hike with a river crossing. But if it starts to rain too much we would not do the river crossing because it is unsafe to cross if it is waste deep. Ok. M. looked at my pants and said, “You’re wearing those?” and I say, “yeah”, and he says, “didn’t you read the thing about wearing cotton?” and I say “yeah”. “Alright then”, he shrugs. The trail was very cool. Most of the time we were under the canopy and only felt a few drops here and there. M. would stop and tell us about the plants and trees and have us sample the greenery, i.e. eat it. I remember the Tarzan vine that tastes like asparagus (but that isn’t its real name) and the pepper plant, which you chew and the more you chew the hotter it gets. The Maori would chew it and stick it in a bad tooth and it would numb the pain. I only chewed it a few times and my tongue was going numb. Everything that was edible he said tastes like radish or asparagus. And then after we would all try something he would say it was used as a diuretic. Ha ha, very funny. We climbed over a ridge, lots of stairs and muddy slopes. All very safe though, and then the river crossing. The water was up to just past my knees. It was cold but it felt good. We then squished the rest of the way, which was only a half hour or so. Saw some birds and some young male horses. The hike ended in town and we had time to use the restroom and do a little tourist shopping if we wanted. M. and S. went to get the bus and they drove us to a little trail to Truman’s Beach. He said it was just a little 30 minutes hike to the beach and back, and lunch will be on your seat when you get back.

Truman’s Beach was pretty cool too. By now is was raining not hard but consistently. We got back and sure enough, we had sandwiches and a little chocolate waiting for us on our seats. M. took our wet shoes and socks and we changed into dry socks and shoes and off we went on the bus to Hokitika. The last real town with a gas station and grocery store for the next three days. It is famous for its greenstone (Jade). There are a lot of shops that sell jade and M. dropped us off at one where you can also watch them carve it and talk to the carvers. I bought a piece of raw cut jade. They had lots of jewelry, but mom is so particular that I didn’t even try. M. and S. went to the grocery store to stock up for the next 3 days for us and to get petrol. So we had about 1.5 hours to wander around town. It was really raining by then so I tried to stay under storefronts as much as possible. Went into Kodak and used the internet for all of five minutes (shared time with B. (another REI-er). $3.00 for 15 minutes. Then I met up with most of the others at a coffee shop and we sipped cappuccinos until M. and S. got back. Then it was off to Okarito. Man was it raining! All the rivers were full at the edges and just gushing. Waterfalls everywhere, pastures were flooding, well parts of them were. The pastures here are designed so that there is always high ground and so that water will flow out of the pastures. M. said the town has 32.5 people living in it. The .5 is a boy. We are staying in 3 houses. D. and I have one house (3 bedrooms, 4 bathrooms, and a kitchen), the others are staying in a bigger house where we all eat and M. and S. have another small little house, but they have to use our extra bathroom because their little place doesn’t have one. Very nice. There is a leak in the roof in our kitchen and a small one in my bathroom right over the toilet, so if you sit there long enough, you get a drop in your lap.

We will be staying here 2 nights. Tomorrow morning after breakfast, we will go kayaking on the lagoon, which is all of a 1-minute walk from our houses.

Not that particular....ring, sz 8, small stone! This is your mother speaking.

ha ha too late! Wait, I feel the guilt all the way down here!

what's wrong with your pants?