I took a trip to my local B&N today. I picked up Lee Child’s Killing Floor, George R.R. Martin’s Game of Thrones, and Elizabeth Gaskell’s North and South. A thriller, a fantasy, and a classic. Talk about a mixed bag. Got Child’s Killing Floor because it is the first of one of his best known series, and everyone I have talked to who has read them say it’s great fun. I like fast paced good action thrillers. I was going to get David Morrell’s First Blood, you know the Rambo movies right? Well, it was a book first. But they didn’t have it. *sad face* So I got Martin’s Game of Thrones, instead. I’m very picky about fantasy books. I have a hard time finding ones that I actually like. But I thought I should give this one a try, it is an HBO series now and it’s all the rage. I think I can handle some magic, mayhem, incest, and epic betrayals. And now the classic. I recently watched the BBC production of this novel and absolutely fell in love. No really. The whole puppy dog googlie eyed, I have to watch this over and over again in love. Ok, maybe just the ending, but still. Now that I know what Thornton looks and sounds like, I can get all googlie eyed in the text. Charles Dickens gave her good reviews, so it must be a good book as well.

The whole point of this is I haven’t been able to read much lately. I’ve started reading several books and just haven’t been in the mood, or they just haven’t captured me. Hopefully these will get me going again. I also need to re-read The Hobbit before December, to refresh my memory before I go see the movie extravaganza. It will be epic, EPIC I say!
Posted by The Lonely Traveler at 2:53 PM No comments:

Again, with feeling this time!

It has been over a year ago now (year and a half, actually) that I read a weight loss book and followed the program in the book. Within the first two phases of the plan which were 8 weeks long each, I lost 20 pounds. The third and final phase was maintenence. For the past year I have kept the weight off. Only gained 2 pounds back. Not bad. But I never reached my goal. My goal was 30 pounds. I never lost that last 10, now 12.

I decided that it is time. I am not on the strict diet anymore, however I do eat a lot healthier now and better balance my carb intake which was my demise. For the past 4 weeks I have been running at least four days a week about 2 miles and been using my dumb bells.

I always need motivation and rewards, otherwise I stop. I still keep with my original motivation of every 5 pounds lost I get to buy a DVD. I already know which one I will be buying, it is in my amazon cart just waiting for the day I get to say “yes, ship it”. But that hasn’t been enough, obviously. Sure I kept 20 pounds off for over a year, but I didn’t finish.

So the first two weeks of this new start, my motivation was two fold. Firstly, I love soda. RC, Pepsi, Coke, in that order. So if I run and work out, I get a soda that day. If not, then I don’t. That’s good motivation for a caffeine addict. The second which was the linchpin was I allowed myself to watch an episode of Spooks (MI-5 here in the US) from netflix if I ran. I couldn’t stand not being able to watch it. So again, it was good motivation. I have since finished watching the episodes I wanted to see (seasons 7 and 8). I no longer need that extra push. The soda a day is motivation enough now.

I was very frustrated at the end of week two, thinking I was doing really well and probably lost a few pounds by now.... Well, I got on the scale and wham! I gained a pound. I was so mad. But you have to remember, it takes about 3 to 4 weeks to notice any physical changes. Mentally and physically I felt better, but there isn’t really any noticeable change in only 2 weeks. First you gain muscle before you lose fat. And I had to remind myself of that. So I decided not to weigh-in at the end of week 3.

Now that I am into week 4, I am starting to notice little changes. I can now start to see my muscles in my legs, I have pectoral muscles again (I missed them), and my arms are firming up. I still have that roll of a tummy, but that my friends is the curse of family genes. I have it, my brother has it, and my mother has it. I would like to get rid of it as well. I want one set of hips, not two.

I don’t necessarily like running, I’m not going to start running marathons or anything like that. And eventually my knees will stop me (hopefully not for another 30 years or so). But it seems to be the most effective way for me to lose weight and get in shape. And I do feel better after a workout.

*I wrote this last week and never posted it. I did upload it to an online forum I’m part of for some of the peeps who are doing this weightloss challenge with each other. I wanted to share a little with them. But I didn’t post it on my actual blog. Why? I suppose I have this fear that I would stop. I do tend to start things and never really finish them. Learning a language, new musical instrument, etc. And I didn’t want to jinx myself. I’ve posted things before where I say stuff like, “next time” or “I’ll update you when I’m done” and then.... nothing. It is a week later now, and I’m still running, so, for now, I feel safe enough to post this one.
Posted by The Lonely Traveler at 10:32 PM 2 comments: 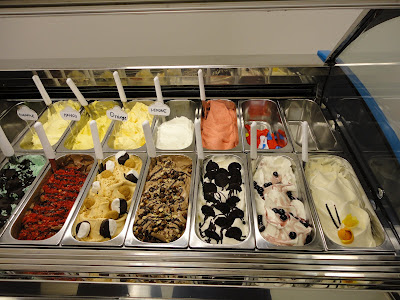 *As I write this I am in the Charlotte airport in North Carolina way too early for my one of three flights home from Carpigiani Gelato University. The rain was pouring in Winston Salem and I didn’t have anything I wanted to see, so I left the hotel at checkout time and came down to Charlotte. The rain poured all the way here. So here I am 3 hours early, already checked the rental car and through security. So glad this airport has free wifi. On with the show. My flights to North Carolina were... well... it’s U.S. air travel, when is it ever enjoyable? My flight to LA was fine. The flight to Chicago was full and I was at the rear of the plane. And we were late getting into Chicago. So I had to walk very fast to get to my next connection. Got there with 5 minutes to spare, and they said, “oh they just got here and haven’t even deplaned yet.” The plane to Charlotte was old and small. The carpet was worn, the seats had no fluff, you could actually feel the metal in the seats, and it squeaked. And of course Charlotte was experiencing “weather”. We circled for 40 minutes, then got diverted to Tennessee to refuel. And back to circling Charlotte. We landed about 2 hours late. Then waited at Hertz for my car for 40 minutes because they were running out of cars??? Whatever. I then drive through the pouring rain and lightning storm for 1.5 hours up to Winston Salem. I finally got into bed at 2am (eastern standard time) and was up for my first day of class at 7am. Sorry, just had to complain. I hate traveling. I love the destinations, just not the getting there part. Day one of Gelato school: Class size was 9 people. Three of us from California, three from Canada, one from Atlanta, Virginia, and Philadelphia. Our instructor was from Bologna, Italy. She owns, I think she said 5 gelato shops, and also consults and teaches gelato classes all over the world for Carpigiani. We learned about different sugars and what they do, milks, creams, and eggs. We made three different bases. White (milk), yellow (egg yolk), and cocoa (chocolate). From the bases we can build whatever flavors we want our gelatos to be. We were divided into groups of three and we made some standard flavors such as vanilla, milk, creme (egg), chocolate, etc. Then at the end of the day she had us create something all our own. Our group decided to make a hazelnut mocha. And guess what? It was delicious! Our group won the taste test! Yeah, baby, yeah. The second day each student had to create their own again, and I made sweet potato. Suppose to be pumpkin but they couldn’t find canned pumpkin in the store. It tasted pretty good, could have been better with added spices (didn’t have nutmeg). But my presentation was good. 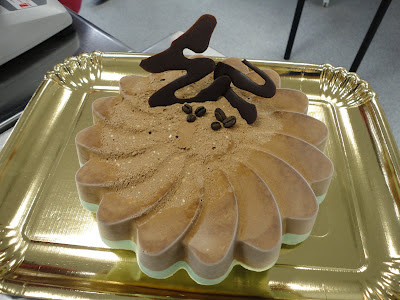 Each and every day was packed full of math. I had no idea I was going to have to remember my algebra. Calculating percentages and if A is this and B is that and you need X percent to get C, etc. And god forbid we have to calculate all this in our crappy American measurement system! Oh my. I will be doing everything in grams and kilos, thank you very much! We learned how to create different bases with different ingredients and how each ingredient affects the taste, texture, and consistency of the gelato, fruit gelato, and sorbets. By the end it was almost overwhelming. So much info packed into 5 days. Also learned what machines I will need to start the business. Anyone have $100,000.00 just laying around they don’t need? The class was fun, our instructor was fun and engaging, my fellow classmates were fun and interesting. We all went out to eat our last night together. Of course it was Italian. Our instructor looked at the menu and said, “this isn’t Italian”. bwahahahahaha. After we went into this frozen custard shop and critiqued their shop, presentation, and taste. I don’t think they liked us very much. tee hee. But their presentation was horrible. So much info packed into 5 days I can’t possibly tell you all about it. Well I could but then where would all the excitement be when I open my shop and you all know my secrets? 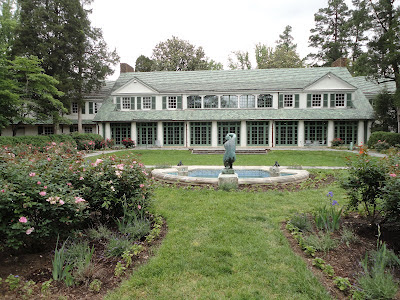 I didn’t do much sightseeing while there. Class ended at 5pm everyday, except our last day, so there wasn’t much time to do anything. However I did go walk around Old Salem which is where some persecuted Moravian religious Europeans settled in 1771. They are still there and still live in these really cool old houses. And I went to the Reynolda House, which some lady named Katherine decided her family was going to be self supporting and grew their own veggies, grains, etc and eventually grew their own town. The house is now a museum of American Art and the grounds, outbuildings, and town are now shops and restaurants. The house was pretty cool though. They had a pipe organ in the “parlor” and the pipes and tubes were placed throughout the second, third story, and attic. Plus the basement had a pool table, bowling alley, shooting range, squash court, an art deco bar, and swimming pool! Wake Forest University now owns and maintains the extensive gardens and land used as pasture. So all in all, well worth the money spent for the class and expenses to get here. Now I have to sit in packed airplanes again. Oh joy. * airport won’t let me upload photos or this document so you all had to wait till I got home and slept.
Posted by The Lonely Traveler at 12:31 PM 3 comments: