The fish were hungry

Got up way too early this morning after not sleeping well. Ugh. Breakfast was at 6:30am, but I never made it. I was up, but didn’t have time. Ended up being a good thing to miss later on. It rained overnight, but by the time we were getting ready for kayaking, there was hardly a cloud in the sky. Milford Sound is jaw dropping beautiful. Kayaking was great. Playing in the swells from the cruise ships was fun… until I fed the fish. Well actually I felt much better after I fed them. Despite that part, it was great. We paddled into the spray of a waterfall, saw seals, nesting sea birds, and sand flies. Heh. We were on the water for just over 4 hours. My arms were tired, but it was great. Great weather. Once we got out of the water, the clouds started rolling in. So it was perfect. Now the clothing they put us in was hilarious! Horizontal stripped long johns, then a fleece sweater, then the waterproof jacket with neoprene (the stuff wet suits are made of), and the skirt. We looked like a bunch of characters from a Dr. Seuss book.

All the pictures I took while kayaking are on the disposable waterproof camera, but hopefully I will get a few good shots. It’s hard to capture this place on camera; it’s just too much. 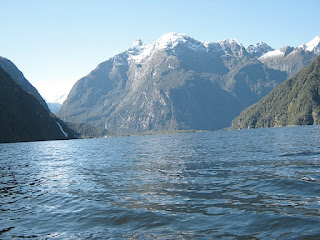 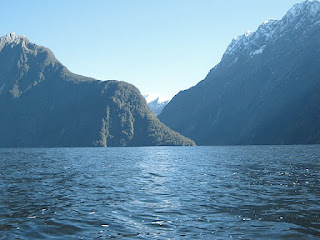 Apparently my paddle partner, B. didn't even know I puked. How can you not notice me leaning over the side turning my stomach inside out when you're sitting right behind me? I suppose it was good that most people didn't see that.

We had lunch at the backpackers. S. made chili. It would have been great had I not fed the fishies earlier.

We left Milford after lunch and headed back to Te Anau, and then to Manapouri. We did a just over 2-hour hike (about 5-6 miles) along a portion of the Kepler Track. Portions of Lord of the Rings was filmed there (i.e. the end sequence of the first film were Frodo and Sam leave the Fellowship. Where Sam runs into the water while Frodo is leaving). Anyway, that was a nice hike.

Dinner was venison tonight. It was really good. It didn’t taste like the gamey stuff I have had before. Then I got asked out on a date by the weird guy. Now the last few days of the REI part of the trip will be weird. Ugh. Why couldn’t our cute guide ask me out? Heh heh, probably not even allowed to anyway. That and his personality is such that every woman on the trip married, single, lesbian, or for that matter anyone bipedal is smitten with him. So why be just another annoying bee buzzing in his ear. Whatever. Did I mention Milford Sound was AMAZING?