And so I say again, it's been a while my friends 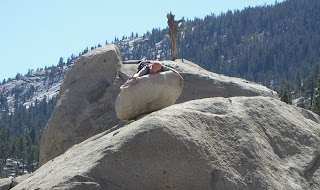 Just a pic of me hugging a huge marble, really it's marble... from about two years ago at Florence Lake, California.

It seems I say this every time…. It has been way too long since the last time I wrote. I keep thinking about it, but then I never do just sit down and write an update. A lot has happened since the last time. My sister and I bought a house together. And we are actually enjoying each other’s company. I never thought I would live with my sister and her two teenage sons, but I am happy being with them. There are a lot of “home improvement” projects, many are done, there are plenty more to do. I’m trying to build a bookcase; it’s not going so well. But I really want it, and well, what I want, I have to build myself because there is nothing like it out there. I fell in love with it when I saw it on TV. If anyone (and I know who you are) ever saw the show Moonlight last year (only one season) the main character, Mick, had the most awesome bookcase in his apartment. So I am trying to replicate it to fit my bedroom.

I’ve been doing a lot of thinking lately, and that can be very dangerous. Actually it gives me anxiety attacks. (Thanks dad) The things I’ve been thinking about give me these lovely heart pounding, I don’t want to puke feelings because they are things I don’t have answers too, and I will never really know the answers ever, because well… the questions are open ended… and can have many answers or none at all. Why do I think such things in the first place?? I love torturing myself apparently. I’m going to keep thinking about them until I finally face them, really think about them, and answer them truthfully to the best of my knowledge, and where I am in my life right now.

On a brighter note, my 31st birthday was one of the best birthdays of my life… ever! I spent it with my family. And my two nephews, my sister’s boyfriend, and myself went indoor skydiving. One of the coolest experiences of my life. Don’t know what else to really say about it, but woo hoo! Here is their website: iflysfbay.com

Now, on with the archaeology. I’ve been working a lot in the foothills east of Fresno lately. That’s where I am right now, actually. In a hotel in Fresno. The only good thing about Fresno is that it has a lot of good restaurants, and that it is close to the beautiful foothills and Sierra Mountains. Other than that, there isn’t much to see here. We’ve been doing survey work and recording (documenting) sites near and under the transmission lines (power) that feed Los Angeles, on private property. It has been a… well… interesting experience. Being on private property automatically puts me out of my comfort zone. Our client (who we are working for) was supposed to notify the property owners that we would be on their lands. Well, that never happened. So since I am the project supervisor, I am the one who has to “talk” to these owners when they see us on their land. Several things have happened. 1. Owner comes up in big truck with big hunting dogs and loaded rifles. I about shit my pants. “Who are you and what are you doing?” I explain. Then he lightens up a bit… he thought we were illegally hunting on his property. He said he had caught hunters earlier in the day nearby. Then he said that there are 3 mountain lions nearby as well, a mother and 2 young adolescents. Oh wonderful. 2. Owner comes up on his horse, asks “who are you and what are you doing?’ I sense a theme. I explain… he is concerned that we stay only where we are suppose to stay… which is only in the “right-of-way” i.e. 300 feet on either side of the transmission lines. I say, no problem. 3. Property owner comes up in big truck; stares you down like he wants to kill you with his eyes. (I had a headache that day… turned into a three-day event). He was not happy, at all. He asked for proof of who we were. So I gave him phone numbers of our client. He calls them right then and there. He’s not happy. He doesn’t like our client, never did. He doesn’t like us, or what we do. He doesn’t want anyone on his property. He doesn’t want the Indian people to know about what is on his property. (He thinks, if they did know, that they would somehow get access – that’s not how it works, by the way). He thought we would “loot”. It was just all negative, negative, negative. Seriously, if he could kill with his eyes… geesh. I said, hey, if you want us to leave, we will. He finally said, well you’re almost done, you might as well finish. So the next day, we worked like a bee was up our ass, and got the hell out of Dodge! 4. Meet the leasers of the property and/or owners and they are chill, don’t care that we are there, or they are ecstatic and do whatever they can to help. I like these people. I’ve been having phone conversations with one in particular who is so ecstatic about what is on his property that, after we had finished with his property, he has gone back out and found more features and wants to send me pictures, and wants to know all about it. He’s pumping me for any information he can get. I’ll say again, I like these people. So this project has brought me tons of stress and I’m sure more grey hairs; it is the project that never seems to end; but also a lot of satisfaction and joy. I am learning a lot about the cultures that were here before the cattle ranching and citrus orchards. i.e. the Armenian immigrants and the Yokut Indians. This is the first time that I have worked on a project where we have found pictographs and mortars 35 centimeters in diameter and as deep as my entire arm. These sites are amazing. 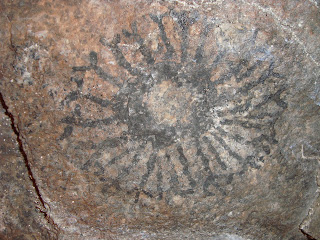