On the 16th of October I left for the little town of Auberry about half way between Fresno and North Fork in the foothills of the sierra's. There I met my co-worker who works for my company as well as others (she is also 58 years old). The next morning our Native American monitor (from the North Fork Mono Tribe), met us in Auberry and off we went to start our survey. Now, I had met our NA monitor before and had worked with him briefly once before, so I knew he was a nice guy and such. He is also in his mid 50's and slightly overweight (strangely enough, most of that weight is muscle - go figure). Our job was to survey a "historic" trail that somewhat follows the San Joaquin River on the Madera County side(I say "historic" because that usually means european, but in this case, the trail was made and used by Indian cowboys pushing cattle from about 1900 on up to the present). The trail is about 7 miles long and is in the shape of a horseshoe, hence the name "Horseshoe Bend Trail". We were to survey the trail and 15 meters (50 feet) on either side of the trail as well. So our NA monitor (I'll call him NAM for now on) walked on the trail and I took the high road 15 meters from him and my other co-worker (I'll call her CAM, because I can) took the low road 15 meters below and off we went. Now, this trail is not marked and not maintained and has several off-shoots and other bisecting trails, cattle trails, deer trails, and cowboy/horse trails... so figuring out which trail was ours was sometimes quite confusing... there was a lot of back tracking and up hill/ downhill, "where the hell are we" moments the first couple days. The first day we hiked in 1.6 miles, and found two sites, and one isolate (an isolated concrete box thingy), oh and a really cool rock shelter (but it was impossible to discern whether it was "old" or not.
The second day we made it in only a little bit further. By the end of day two, NAM was complaining that his knees were hurting and he wasn't sure if he could hike the entire trail. It took us two hours just to hike out the second day. I'm thinking at this rate, we aren't going to finish in time and how are we going to get halfway down the trail if it takes us two hours to hike in and two hours to hike out? (plus our drive time to just get to the trail and back is 30 minutes) We won't have time to survey and record the sites! NAM said he has a friend who would be willing to drive us down the 4-wheel drive dirt fire access road that goes down the center of the horseshoe, and then we would only have to hike down (steep down) to the center of the trail and then walk out either way... (thinking this would save time and legs (NAM and CAM legs) I wasn't all that sore... yet. Actually CAM's legs were all right too, NAM called her a mountain goat because she would disappear and then all of a sudden, she would pop out of a drainage ahead of us.
So on the morning of day three we were to meet at our normal place and meet our "4-wheel driver". CAM and I drive up and low and behold it's... BAM! (I'll call him BAM, as you may have figured out, that's not his real name) Anyway, I know BAM, he's another North Fork Mono guy in his late 60's) I worked with him last summer for about a month on some excavations in the sierra's. So I get out and give him a big hug, and said, "I didn't know it was you!"
So we all pile in to BAM's truck and off we go. We realize it won't save much time doing this, but it did save our strength for the end of the day for our hike out. It's also really fun to listen to these two old Indian guys heckle each other and make fun of each other (most of the time in Mono - they are both fluent although they both say they aren't). The one line zingers were flying out of all of us - it was always a fun way to spend the morning. We would get down the mountain to the trail in about 30-45 minutes from being dropped-off by BAM. By then it was usually 10:30am (we started the day at 8:00 or 7:45).
BAM dropped us off a total of four times. I wish I had taken a picture of what we hiked down those four days, oh well. But here's a picture from the trail looking out over Redinger Lake. 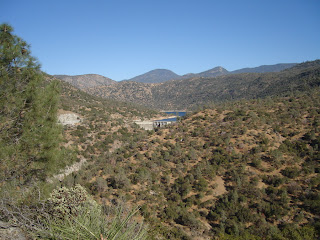 This is getting long so I'll post the rest tomorrow. I'll tell you about NAM and how he has blended his Indian spirituality with Christianity and how his ancestors communicate with him. It's interesting. It would probably be important to tell you that NAM is also the head of the council of his tribe, so people look to him for special occasions and ceremonies, and any issues in the tribe.
Okay, tomorrow...
Posted by The Lonely Traveler at 6:32 PM No comments:

So, a couple weeks ago now, I got to play the part of FedEx. We were working on a big proposal on a deadline which was Friday the 12th, by 2 PM. Wednesday afternoon, my boss asked if I'd be willing to go to LA on Friday. "uh... okay". Thursday roles around and we are still working on the proposal. So I buy my plane tickets from SJO to LAX and back and reserve my rental car to get me from LAX to Long Beach. We finished the proposal by 8:00PM on Thursday. And so I flew it down to LA the next morning. I drove it to Long Beach, and dropped it off with a security guard, who wrote me a receipt. Apparently, visitors aren't allowed in the building. I turned around and drove back to LAX and got on a plane to fly back home to SJO. So basically my company forked out $500.00, and paid me for a day, to play FedEx. I suppose it wasn't a bad way to spend a Friday.
Posted by The Lonely Traveler at 8:30 PM No comments: