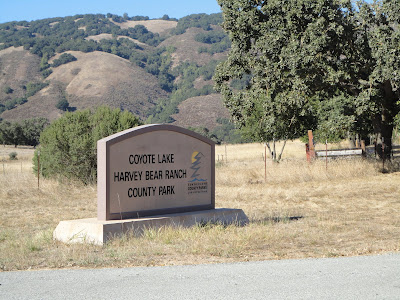 A few weeks ago now I decided I needed out of the house but didn’t want to go far so I went to a trail head that I knew. But decided that I should try to get to the lake from this entrance. I have hiked around this area before a few times but have never done more than a few miles or more than the Mendoza Trail loop. The entrance I park at is the Mendoza Ranch Entrance which has free parking, but the only restroom is a port-a-potty. The Mendoza loop is great for a short 1 hour hike during a lunch break or just as a quick getaway.

This trip I did the Coyote Ridge Trail and looped back on the Valley Oak Trail. It is about 5.5 miles total. No major elevation gains, and once at the lake you can refill your water if you’re low. Also once at the lake there are picnic grounds and bathroom facilities as well as a fish cleaning station, if you are so inclined to fish there. 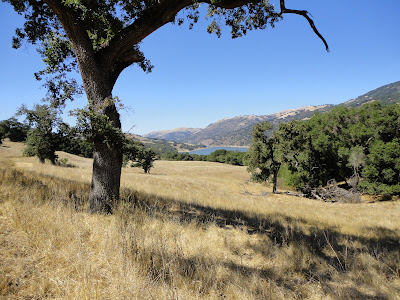 I was expecting the lake to be blue and beautiful. It was more a green-brown color and not so appealing. It is used mostly by people wanting to fish or jet ski or take their motorized boats for a spin. Not for sun bathing or swimming. It is not the cleanest reservoir due to the motor boats and that most of the park is a working cattle ranch.

The trails are moderate and are great for families who are not wilderness back country mountaineers. If you want exercise and don’t want to travel far from home to “get away”, this is a perfect place. Or if you are a novice camper... a great place to try out your camping skills. If you get scared of the squirrels and bugs, you can always drive home in minutes. 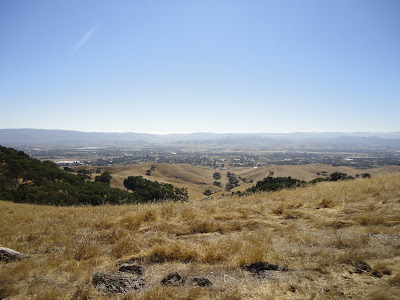 I enjoyed the hike. I am however used to the views by now so it is not breathtaking for me anymore, but don’t get me wrong, the views are gorgeous, it’s just that I have seen them a lot now. From the ridge trail you can see the southern Santa Clara Valley and the coastal range. 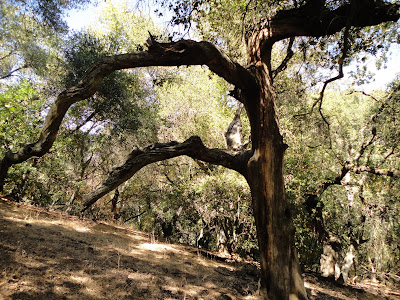 Walking along the Valley Oak trail you are immersed in the oak woodlands walking under the canopies of Black Oaks, Valley Oaks, Blue Oaks, and Bay Laurels. In the spring there are wildflowers. On my hike, I passed one lady on her mountain bike and saw one boat and one jet skier on the lake. I saw plenty of wildlife: Deer, wild turkeys, hawks, quail, turkey vultures, and of coarse squirrels and lizards. The trails I took are well maintained, no risk of poison oak if you stay on the trails. 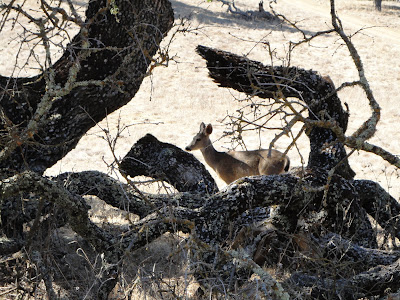 I did the 5.5 miles in about 2.5 hours and my camelback backpack held enough water for my trip. My only warning would be this: it is a working cattle range which means there are cows about. So when you cross a gate on the trails, please close it afterward. I’m sure the ranchers have their cows separated just the way they like them. And watch where you step. Squishing into a fresh pie may not be to your liking. 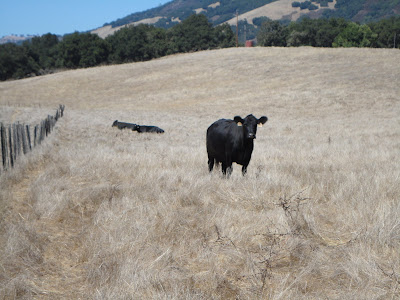 Some of my friends seem to think I'm crazy to hike by myself. When I do hike on my own, I choose places that I feel safe in. Sure bad things could happen. I could get mauled by a mountain lion or break an ankle in a hole, but those things could happen with a hiking buddy as well. I choose places that if such things do happen, help is not far away. And I don't go hiking at dawn or dusk when mountain lions are about. I'm not stupid. And I never stick earbuds in and listen to music when I'm out there. The natural world sends out messages, and I need to hear them and so do you. 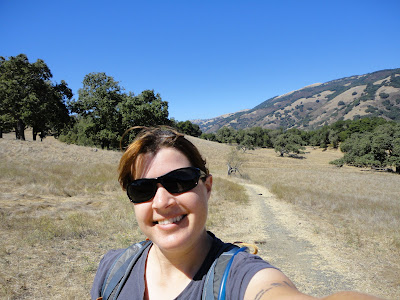 Posted by The Lonely Traveler at 6:01 PM No comments: 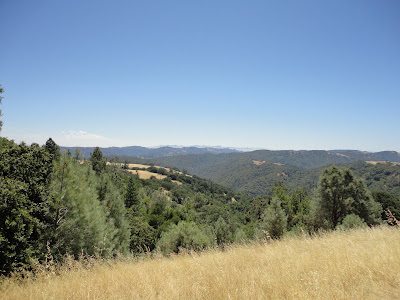 A while back a friend of mine Facebook-ed me one night and asked if I wanted to go hiking the next day. Sure! Don't have to ask me twice. She drove down from Milpitas and I drove up from Gilroy and we met in the Parking lot of Trader Joe's in Morgan Hill. We drove up to the main entrance to Henry Coe. We were the only car, heck looked like we were the only visitors. We figured out the parking fee (on the honor system) and we set off on our first hike of the day (after my friend spotted a snake of course). We did a loop of the Monument Trail and the Ponderosa Trail. I had read in a little hiking guide book I have that this is a great trail for sweeping views and good for a short hike. It was about 2.4 miles. We did it pretty quickly. The views were pretty awesome. There is a steep section right at the beginning, we stopped once or twice to catch our breathe (but really it was to take in the views). We came back to the Coe Ranch Headquarters and had lunch, and decided to do another trail. We did a another loop that entailed the Corral Trail, Forest Trail, and the Springs Trail.

And that's where things went bad. Not super bad, to me anyway, because they all happened to my friend. We saw a little detour though some rocks and I went in front. And right when I said, "don't fall in the poison oak", she slipped and landed butt first into the poison oak. In the process tweaking her ankle. She said she would be fine so we continued on. Then she ran out of water on our way back. I gave her the last bit of my gatoraid. About 5 minutes or so from completing the loop she got overheated and we stopped and rested for a good 5 to 10 minutes. We made it back to the Headquarters and she puked. Ew. Luckily the Ranger decided to fix the photocopier machine so the visitor center/ gift shop was open. I went in and got her a cold water and me a soda. But of course I had to talk to the Ranger, but I'll tell you about that later. My friend sipped the water, and when we thought it was safe to get in my car to leave she puked again, but not in my car thankfully. I puked in someone else's car before and I have not lived it down yet. I then drive slowly back down the mountain and to her car. I ask if she will make it home ok. She assured me that she was going to be fine. I heard later that she didn't quite make it home before she puked again.

Question: How come every time someone pukes all conversation turns to "there was one time when I puked..." like this subject is suppose to make the person upchucking feel any better?

We were making fun of it all the whole time. The "oh my god, i killed Kenny" thing. In actuality we didn't bring enough water with us. At the headquarters there were water fountains and we should have restocked before we left for the second hike after lunch.

Also, I have puked horribly after ingesting gatoraid before. Most of them are too sweet and my body will react to that. And apparently so does my friend. She was also wearing shorts. I don't recommend shorts on these trails because of the poison oak and that some of the trails are narrow and through high grasses, so if one is sensitive to varying types of grasses brushing against your legs, then shorts should not be worn.

We had a great time except for her twisting her ankle, falling in poison oak, and upchucking. We didn't even scratch the surface of this parks network of trails. Henry Coe is the largest State Park in California. It is over 87,000 acres! Besides day hiking like we did, you can backpack, camp, fish, ride horses, etc. If you are backpacking, you better be serious and know what you are doing. 23,000 of that 87,000 is designated wilderness. You really can get lost... for many many days.

Also, this is one of the parks slated to close in July 2012. This lovely state decided to cut the State Parks budget in half and close over 70 state parks. I think this was one of the stupidest ways the state thought it could save money. And the Ranger I talked to agreed with me. When the park is closed and the trails and campgrounds are overgrown and the water system is turned off, who is going to find the idiot who decides to go on a backpacking adventure to prove he is all that, when he gets lost?? Who is going to patrol 87,000 acres to make sure nobody is growing pot in it or hunting illegally? And where is the state going to get the revenue the parks brought in? They may have a budget from the state but they also made money for the state. I don't understand why you would cut something that makes you money.

Anyway, you can see I have issues. Henry Coe Park is trying to fight its closure. If you'd like to help by donating money the Coe Park Preservation Fund is the place www.coeparkfund.org or if you are the letter writing type, write to your congress person.

Henry Coe has been my backyard my entire life, yet I have only been in it once. Strange that sometimes you don't see the value of a place, especially one so close, until it is threatened or gone.
Posted by The Lonely Traveler at 11:40 PM No comments: