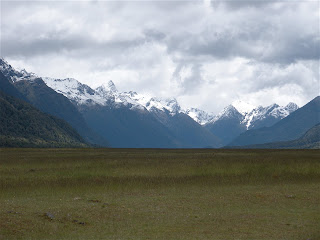 We left Queenstown this morning around 8am. We stopped in a little town called Te Anau. We stopped in at the DOC office there and walked into town. M. and S. had sandwiches and huge muffins for us for lunch. We then drove into Fiordland National Park(apparently I'm not the only one who can't spell), which is also a World Heritage Site. We did a little walk to Mirror Lakes, and then we had our big hike for the day. We did a portion of the Routeburn Track (Key Summit Alpine Walk), which is about a 3-hour roundtrip hike. At the summit there are alpine marshes and small pools of water. Very cool. And we had awesome views today! Just amazing vistas. Now this is what I had in my head when one thinks about New Zealand!

We did two little walks after the Key Summit Alpine Walk on our way to Milford Sound, which isn’t a sound at all, it’s a fjord. Anyway we went to the viewing gantry for Lake Marian and then to The Chasm. Both were very beautiful walks, I took a crapload of pictures today.

We saw lots of Kia, the Alpine Parrot. And snow. P. put snow down M.'s back, so he threw a snowball at her in the bus, some of which hit me, so I threw some back at M. and hit him in the head. I think I pissed him off. S. just looked at him and said, "You're cleaning the bus." We drove through a mountain. It was the longest tunnel I’ve ever been in besides the BART train from Oakland to San Francisco. 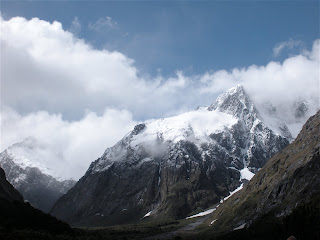 We are staying at a backpackers lodge here in Milford. It’s the only place to stay. Simple rooms with 2 beds and a heater. We share bathrooms. Tonight we are eating dinner at the pub. So who knows what will ensue there. Tomorrow we have an early day. We start our 4 hour kayaking on the sound at 7:15am. Ouch. But it looks to be a beautiful day with no rain!!