Ouch ouch, are we there yet? 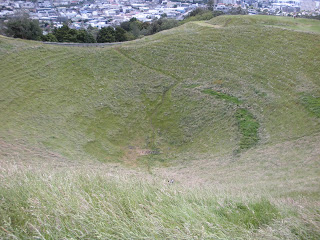 After being a zombie for 29 hours, I slept very well. I awoke at 9:00am NZ time, and amazingly it was SUNNY! Well, there were large puffy clouds, but I’ll get to those later. I was out of my room by 10:15 and on my way down to the harbor (Viaduct Harbour). I stopped at a little coffee shop and got a dark mocha. Oh was it delicious. Creamy, frothy, and chocolatey. The Auckland waterfront is gorgeous. It really is a city of sails. Huge, and I mean HUGE sailing ships, yachts, and what-have-you. There are a ton of restaurants, shops, and the like. Apparently New Zealand will be hosting the Rugby World Cup in 2011, so there are lots of shops for the All Blacks (the national NZ Rugby team). Ironically, the NZ football team (soccer) name is the All Whites. There must be a reason for the names, I just don’t know it.

I walked around to look at all the boats, there is one called the Søren Larsen, which is a wooden sailboat. And you can tell by the name that it was originally from Denmark. It’s been in a couple movies (none that I’ve heard of) and has circumnavigated the world twice. You can take cruises on it now.

I went to the visitor center and picked up a map of the Coast to Coast Walk. It starts at the Waitemata Harbour. So I start off… and get lost. The map provided me was mostly useless and the walk itself…. Not really marked… at all. Supposedly I was to walk through the University of Auckland, I found the university, just not the road I was suppose to walk. I eventually find one of the roads much past the university on the walk and just went on. It took me to Auckland Domain (a park) where I got lost again. You will notice, this becomes a theme. It is a large beautiful park. With a War Memorial Museum. I didn’t go in, because, I was lost. I watched some cricket, still don’t understand it. Eventually I found my way out and then the walk takes me to Mt. Eden Domain. This park is cool. You can walk up to the summit, which is a near-perfect crater of Maungawhau (volcano). Stunning 360-degree views, and I again, couldn’t find my way out… lost again. So after going in circles a few times, I went out the way I came in to the park and walked all the way around it to the other side and picked up the walk a few streets off. But at that point, I didn’t care anymore. I walked around Auckland College of Education, and was suppose to go through Melville Park, but again, I missed that street, which on the map had no name so I guessed, and guessed wrong. Oh well. The walk then takes me to Maungakiekie (One Tree Hill Domain and Cornwall Park). This is the largest of the parks that I went too. By now, I was hungry and tired, and my feet were killing me. But this place has some very cool Maori history. Ironically when you get to the summit of One Tree Hill, there is no tree. There was a native tree there, but it died, so they planted a pine tree, which some protester took a chainsaw too, so now, there is not tree on One Tree Hill. Just an obelisk and a dead guy who donated the park to the city. He was one of the “founding fathers” of NZ apparently. Again this park was formed by volcanoes so the landscape is cool. I stopped at the café/restaurant/ice cream place and got a raspberry sorbet in a waffle cone. Why not? I stopped and sat down to watch some kids playing tag rugby. And then headed out for the last leg of the walk. I was so close, I didn’t want to stop. I took some short cuts, and finally made it to Onehunga Lagoon. The end of the walk. I sat down at the lagoon, and the sky opened up and I was immediately drenched. I would have walked around the lagoon to Manukau Harbour but I was drenched, tired, and just didn’t feel like it. I still had to walk to the bus depot to catch a bus back to the city center. I made it to the bus depot, and figured out which bus would get me closest and it came about 10 minutes after I got there.

The walk was interesting even though I probably added a good couple miles to it when I went in circles all those times. It was 16 km, you do the math for miles. I got to see a lot of Auckland and all of the park highlights, and a lot of the burbs. I came away with two blisters on my right foot, and I’m so sore, I walk funny now.

hahahaha! I don't get cricket too!! BUT how are you an archaeologist and get lost so much!! I hope you are having fun! It's supposed to rain here all week so you are not missing much! Love ya boo!