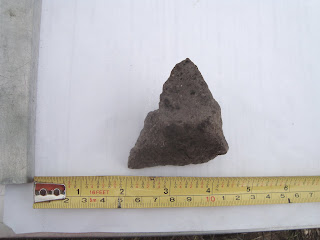 But this little guy here with the help of a rhyolite flake, a couple mano's, and some FAR just put the breaks on a construction job*. This little rock is a bowl fragment. We think it is the bottom piece of a bowl anyway. This find was very unexpected. The rhyolite flake was imported because there is no source anywhere nearby. And when I say nearby, I mean within a 50 mile radius at least. The mano's (hand stones: formed to fit the hand and has "use" wear, i.e. used to pound and scrape the crap out of stuff)and FAR (fire affected rock, i.e. placed in a hearth to cook the crap out of stuff) was probably local material, but was found in a most unusual place. A shooting range. And a shooting range with people... shooting the crap out of clay pigeons (they never had a chance), and bow-and-arrow! This shooting range is in the middle of El Monte, population 115,965 as of 2000. And next to a major highway. Amazing that even with all the development, a little piece of prehistory is still there.

We found this on my second visit to the shooting range (we had previously surveyed the area twice). We came back at the request of our boss, and with a little more intensive searching, wa la, a site. The site started out as an historic one (European - old glass and ceramics [plates and cups]) and while we were sitting down for break under the transmission tower... "hey that looks like an interesting rock"... "oh wow, is that what I think it is?"... "the client is going to squirt their shorts!"...

And they did. What made it interesting is that this little prehistoric concentration was in the berm of the dirt access road that goes around the transmission tower (big steel electric towers), and this road gets graded probably yearly if not more. So by grading this road over and over and over, eventually exposed this concentration. We will now get to answer the questions of is this just an isolated hearth? Was it all imported and dropped? Is there more beneath the surface? Will I get shot in the ass by a rogue arrow? All will be revealed.

*I feel I need to explain a bit more here. The project in question is a transmission line. The client (who we were hired by) will be dismantling an old transmission line and towers and will be erecting (I knew I could get that word in somewhere) new bigger and shinier ones with more power. They have a right-of-way or easement, in some places. Which means that anything we find within that right-of-way, they have to deal with and manage. Even if it is on private property. The client, not the actual property owners have to mitigate what we have found. Our client has decided that they will replace said tower anyway, so to off-set the fact that they will obliterate the site during construction, we go in ahead of them and do it for them (excavation). This is a state and federal government issue and so the client has to fulfill certain requirements by law (state and federal).

Many people have the misconception that if they have any archaeological site on their property (Indian or otherwise) that if the government or Indians find out about it, that it will get taken away. Not so, peeps. Private property means exactly that, private. I've worked on private property before and I've documented sites on private property. All I have the power to do is make life miserable for those who have an easement or right-of-way through said property. It means an agency/company/whoever won't be able to put a cell tower or road or utility pole in the site. They will now have to find a way around it, or change their plans to avoid it. But the property owner can do whatever they want (nothing, graze cows, blast it to smithereens). Also, if the site is one of a kind or pretty darn cool, then the owners can actually get money from the government (state and/or federal) to protect/preserve it. Pretty sweet, eh?
Posted by The Lonely Traveler at 9:31 PM 2 comments: