Guilty pleasures in the mail and the appropriate amount of boobage

Sorry to have not posted anything substantive in a while, but depression and hermitisim happens, so just deal with it. I thought I had broken out of it a week or so ago, even amongst the "bad news" I can't/won't share with you here. And my dark mood has lessened and I can make my co-workers snort in laughter. so things are better.

But that is not why I'm posting today. Today, I am posting because THIS arrived in the mailbox! 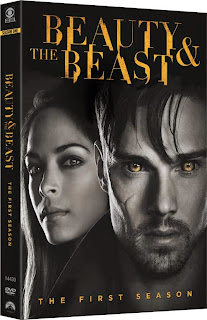 Also super excited (as excited as someone like me can get) that the Season 2 premier is this Monday, and I have the day off of work so I can actually be super geeky and be on twitter and tumblr all day and be all "OMG super duper excited I can hardly keep myself from squeeing". Because I totally say things like that in the company of actual human beings.

This show struggled, poor ratings (it's on the CW for christ's sake), retooled halfway through it's first season, late pickup of the second half of the season, and late renewal. So apparently it has been "retooled/revamped" some more for it's sophomore debut. Let's face it, the second season of a struggling show is always the make it or break it season. Case in point, Human Target that aired on FOX a few years back. It's first season struggled with ratings but got renewed, got "retooled to gain more viewers" and totally lost it's original viewers and got canned. Another example is Body of Proof from ABC... i think. I never really watched it. But it got cancelled after it's first season then got a reboot and got uncancelled and aired it's second season and got cancelled again. Those are some examples of second season downfalls, which has nothing to do with Mark Valley, I swear. However, some shows got even better in their sophomore years. Nikita was awesome in it's second season. So was Haven. Haven is in it's fourth season now on SyFy and Nikita will air it's final short season 5 on CW this fall/winter. So we shall see how my little guilty pleasure holds up on Monday.

Also I wanted to share THIS with you. Please watch it. It is awesome!

I've decided that I have become quite the Feminist in my mid 30's (when it comes to women's rights especially in the right to make our own choices about our own bodies, rape culture, and female role models). I like superhero movies. I like Batman and Superman and Ionman and yada yada yada. Hollywood has not made a female superhero movie. Or TV show... that has worked. When they tried to make a Wonder Woman tv show the character of Diana came off as weak. You can't have a Super Powered Amazon Warrior Princess weak!! Ugh, makes me want to barf. This little short proves that it can be done, and done right. Without Diana coming off as weak or as a sexpot with her boobs popping out of her itty bitty spandez bra. Also the actress who plays Diana in this short is Rileah Vanderbilt, of Team Unicorn.

Two of my favorite cartoons were Power Puff Girls and Sailor Moon. I liked those cartoons for the same reason I liked the movie G.I. Jane. The protagonist was a female(s) who were brave and strong and fought the battle and slayed the evil whatever, and at the end of the day still remained female and had girl talk and ate ice cream.

That is all for now. Off to go do some "manly" yard work.

Posted by The Lonely Traveler at 3:31 PM No comments: