The second level of hell 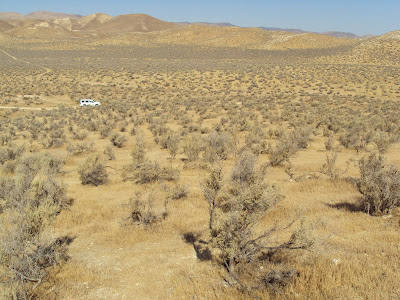 I’ve realized that I have mentioned my time in Taft back when I was an archaeologist several times on the blog but only wrote about it once. Was it really that bad? Yes and no. Obviously I survived the experience. A lot of things were going on at the time, some I saw then, and others only after it was all over. I notice that while looking for pictures for this post I didn't take many pictures. So the ones here give you an idea of the landscape and terrain but not really.

As the months went by (I spent a little over 6 months out there) and my brain started turning to mush I turned to music to sooth me. At the end of the day (for my crew) I would drop them off at the hotel and then turn around and go back out to the, for lack of a better term, field headquarters. I would have to return the gps units, talk with the biologists, discuss tomorrows plans with the various leaders (client, BLM, Oil Companies, geo crew leaders, etc), tell the geeks what we need on the gps units, what they could delete, what they can’t delete and find out the next morning that it was deleted anyway, many many things. After doing this I would then get back into the truck and drive back to the hotel to organize what we had done that day and get ready for the next, or back into the field to clean something up (a forgotten utm point, picture, etc). I would blast three songs on a loop. I wouldn’t play these with the crews, this was just for me time in the smelly, sweaty, sunblock and dust stained truck.

The songs were: click to listen
Welcome Home by Coheed and Cambria

Hear Me Out by Frou Frou

The Day the World Went Away by Nine Inch Nails

You could probably make an interesting case for my state of mind with these three songs at the time. But we’re not, that would be scary. There was a point where I had a melt down that scared my parents to the point of them driving all the way down to see me the next day. That night the only thing I could do to stop myself from screaming and punching holes in the hotel walls was putting my earbuds in and cranking the volume so high that it drowned out all other noises for hours. Plus if I had put holes in the walls, it would have only increased the number of cockroaches. 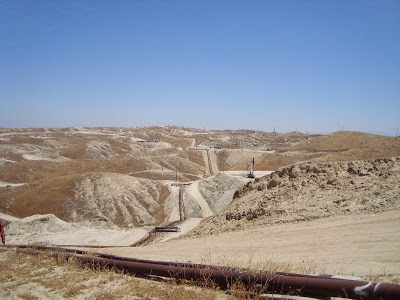 What compounded my mental state was that my physical body was also taking a beating. It was hot. The heat cracked our windshield one day. When it was 110 outside, the ground was perhaps 125-130. The rubber soles on my boots would start to get soft and almost squishy. We all suffered from heat rash. Several of my crew members had convinced themselves that they had Valley Fever. I let them have their fantasy. But perhaps should have smacked them upside the head instead when the debacle of insurance claims got denied by our company when their test results came back negative. I had heat rash so bad on my feet that the hair on my toes stopped growing due to scabbing. It has since starting growing again, thank you very much. It was like having a permanent 3rd degree sunburn on your feet and having to strap them into boots everyday was, well, painful. I was suffering from exhaustion, not enough sleep, and poor diet. Only two restaurants had decent food and the grocery store didn’t have very good looking “fresh” food. Most of what I ate was highly processed. My digestive system by the end was shot. I think I had the shits for 2 months straight. Try taking a dump in a place where the only cover is a 2 foot high salt brush shrub, and then repeating that every day. And then the Most Embarrassing Moment Ever happened. One particular day I didn’t quite make it to a bush. I flagged over a crew member, handed her the gps unit and told her to tell everyone to head for the truck and I’d meet them there. She knew what happened, but didn’t say anything. While they were in the truck with the air conditioner on, I stripped, cleaned, and buried, and went commando the rest of the day. I think they all figured it out, but to their credit never said a word... at least not that I heard. This is also when I started my weight gain. One would think that walking in the heat all day would make you loose weight, but I started gaining and didn’t stop gaining till a year later.

I hid all of this from my crew. A leader needs to present oneself as in control, strong. Apparently my acting skills are superb. I even fooled myself.

This didn’t just happen to me. I had a co-captain. We had an overlapping schedule so that there was a crew in the field every day. On our 10-day rotations (10 days on, 4 days off) we would see each other on 2 of those days. The first day of my rotation was the last day of his and vis a versa. And we didn’t really have 4 days off because the last day was spent driving back to the cockroach hotel. But I digress. I mention him because he suffered all of this himself. Maybe not the poop thing, and where his heat rash was, I do not really want to know. But at the end of the field work we were both shot. Done. Over cooked. I think I mentioned in the other post about Taft that at one point or another, both of us had mentioned to each other that we had seriously contemplated leaving one day and just not come back, even leaving archaeology all together.

I went to New Zealand by myself for a month and he went to England with his girlfriend for a week or two. The poor girl hadn’t really seen him for 7 months! It was so bad we had to leave the continent!

Was it really that bad? Well, I never want to experience that again. But I did survive it. I did learn a lot about myself and my limits (physical and mental). It was perhaps something I needed to experience. Had I not, would I have gone to New Zealand? Would my experience there been the same? Although, I still would have made an ass of myself. I’m good at that.
Posted by The Lonely Traveler at 9:58 PM

That is a damn good story. I particularly like the part where you shat yourself. You need to write a book.

For what it's worth, my heat rash was on my shins - yeah, right where the top of the boot grabbed on. And on my back, where my backpack was in contact. Good times.

I didn't know about the field "clean-up" - and that was probably for the best. I never experienced that myself, but I did become quite good at finding small gullies and drainages in which I could hide from view. My crew cracked jokes about it.

But, we did survive. I have actually ended up back out there a few times since - thankfully never for more than six weeks, and typically at least part of my time was in the orchards to the east. I still get a sort of queasy feeling when I have to work out there.

Oh, also, I began my weight gain on that project, as well. You are not alone. Also, it was when my feet really began to go south, leading to a couple of years in which I couldn't walk, or even stand, without severe pain.

Our upper management should have provided more support, in a number of ways. In fact, they promised to provide us with more supervisors to give us a break, but never did.

I too was sent back out there for some other projects as well. Being there in the winter was a much different experience. Staying in Bakersfield made a big difference too.
I remember your feet issues, sucked.
I remember after my turn at the Maricopa Solar project, we had a bloody blister contest. Jen won with more than 30% of her feet covered in bloody pealing skin blisters.