Let's Dig In: Religion Part II (where my existential crises and limited philosophy skills play together) 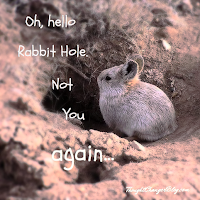 These are some of the rabbit holes my brain goes down when I'm off on an existential crisis. A majority of times I'll stop myself from going down the rabbit hole because I don't want to think about such things, and because there really aren't answers to the questions, at least not satisfying ones. But it is important to think about such things... sometimes. You just also have to stop yourself because it could drive you bonkers. So for me, maybe writing these things down will help me to stop before I go completely bonkers. Also it's important to stop oneself because these thoughts often get dark and can lead to dark corners of the mind that house the negative voices. And giving them a voice can lead to bad behavior and wrong choices and ultimately harm others or oneself. So on THAT lovely thought, here are things and concepts I struggle with:

One of the first things you learn in church is that god created the heavens and the earth. *He created the world in seven days, and created "man" in his own image. I know as an enlightened individual that all the earths creatures were not made in a week, but what a day is to god is probably not the same to us humans. We equate a day as a single revolution of the earth. So if god is sitting up there in the universe looking down at our little spinning ball, it's probably spinning pretty fast in his eyes. Basically I'm saying time and space are irrelevant here. So yes, I think those who take the "god created the heavens and the earth in seven days" thing literally are a bunch of ignorant fools. Now if I take the stance of only science and that gasses and quarks, atoms, and space dust floating around and banging into each other and slowly over billions of years making planets and stuff, I can understand it to a point. I get evolution and the slow creation of plants and animals. But you cannot create something from nothing. So where did those elements come from? Okay so there is stuff out in the universe. But where did it come from? The worlds religions answer that with a being who created the stuff of which we and the universe is made of. Ta Da! This is how many people of science are also religious. The god got it all started. But do I believe that? I can't wrap my head around that concept. So if I can't even believe that fundamental element of faith of pretty much every religion in the world... am I just screwed? I can't explain the something from nothing.

Second thing is the concept of a soul. Humans evolved over billions of years into the species we are today. And if we don't ruin the planet or blow it up in our stupidity we will continue to evolve. So if god created us, at what point in our evolution did he decide this is the point in our development where I give them a soul? We as a species, religious or not, kind of accept that we are conscious beings, the smartest species on the planet, and have something in us that sets us apart from all other species. Conscious thought, a soul. But is it a soul? Is it evolutionary instinct? Intuition? Something happened the day my mom died. And everyone in the room saw it. My mom left her body before her body stopped working. She was still breathing, heart beating, but she wasn't there. Her "soul" was gone. We looked at her and said she's already gone. Just the outer shell was there. Science cannot explain my mom leaving her body prior to her body dying. But religion can. Religion gives an explanation of a soul and what it is. So did her instinct, intuition, and brain (whatever it is that makes us the unique species that we are) stop working first and that's what we saw or did her soul leave first. Did god take her soul prior to her body completely stopping? I don't know. I can go see my mom at her grave. I know that her ashes are under her name plaque. But I "know" she isn't there. What made her her isn't in that urn in the ground. But I don't think she is out floating around in the universe as a conscious being either. And I don't think she is a conscious being in heaven either. I understand that it makes us feel better to think that after we die there is something else. That we continue on in some way. It makes us deal with people dying around us easier to accept. To "know they are in a better place" or whatever. I kind of like the idea that we just cease to be. The brain switches off, the body stops working, and our consciousness just goes to sleep. The end. There's no judgement. No purgatory. No heaven. No hell.

So does this mean I believe in nihilism? Eh..... not really. Because I want my life to mean something. I want purpose. I want meaning. I want to be on this planet for a reason. If I believed that life in general is meaningless and my existence means nothing, then there would be nothing holding me back from just ending said life right now, because what's the point. I don't want that, and I don't think any of you want that either. I need my life on this planet to mean something, to have an impact. I need a reason to live, to keep breathing. I'm not done yet.

If interested, here's some other interesting/funny things I find on the internet:

Here's an 18 year old kid, who at 16 had an existential crisis and his conclusions: NateIsLame My Thoughts on Religion

And here's a collaboration of a young animator (TheOdd1sOut) and a musician (Boyinaband) poking a little fun at living a balanced life: Life is Fun

Lastly for the day, I take issue with religious leaders who play politics. On second thought, I don't want to talk about this. Lets just say that these people are utter shit heads who are horrible, idolize and worship false gods, are power and money hungry (the exact opposite of what a religious leader should be), and give religion and believers a bad name and image to the world.

*In the earliest versions of the bible before being translated into English multiple times, god was not masculine or feminine. God was just god, a being. But in our so called modern culture, god has been given masculine characteristics and prefixes. So growing up in the church, god was always male. And therefore males were better than females. So I always felt this underlying resentment toward the church because I, as a female, was somehow deemed a lesser being. Because Eve was made after Adam and from Adam, she therefore belonged to him. Was less then. That may not have been the lesson intended, but that's what I learned. And no one ever said, "no, no, that's just some dickhead mansplaining bullshit. What god actually said was all humans are created equal and in god's image." Period. End of debate. Male, female, equal. Lesbian, gay, trans, equal. Black, brown, white, equal. Native, immigrant, refugee, equal. Rich, poor, homeless, equal. Autistic, genius, dumb as a doorknob, equal. Whatever you are, you are not more than or less than any other human on this spinning blue ball we all call home in gods eyes. That is what should have been taught in Sunday school. That is what should be taught in Sunday school.

Posted by The Lonely Traveler at 12:21 AM

Thanks for writing this. Looks like you've learned a lot of theology since your days as a student in the kindergarten Sunday School class where I taught. I know some say, "All I really need to know I learned in kindergarten." Obviously, you figured out that's not true.

As for the first part of this post, the part about science/philosophy and religion - For what it's worth, I generally agree with you. Probably should have covered it in kindergarten, but I was probably still working through some of those things.

As for the last section about gender issues. I think you know I've written something about gender recently, but chose not to go into the gender fluidity dimensions, though I have and am thinking about them. Regardless, I generally agree with your point of view.

For an interesting look at both of these issues, check out the TV serial "God Friended Me." The lead character is a millennial atheist, with a lesbian older sister, and a minister for a father. It's kind of cheesy, but I like cheesy. I must admit, I identify with the father/minister.

I hope you'll keep thinking about these things.