And so we had to leave SHP's. Who are SHP? Read Part I, silly. Jumping into a movie or conversation already started is frustrating when you don't know what's going on. Come on now. Anyway, it was time for the next stage of the voyage. To Queen Creek Arizona, or Phoenix for those unfamiliar with the mega-lopolis of Phoenix/Mesa/Scottsdale/Tempe/Gilbert/Chandler/etc. So we left SHP, Poco, and Polly after breakfast and weaved down the mountain to the 10 freeway and headed east. Past the biggest wind farm I've ever seen. It just keeps going and going and going, worse than the energizer bunny. 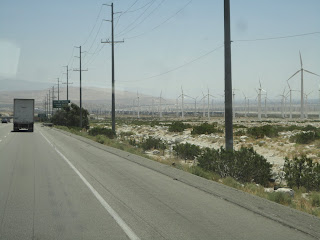 Past Palm Springs... and other desert towns. And the oh so lovely Blythe... ew. And crossed into Arizona! 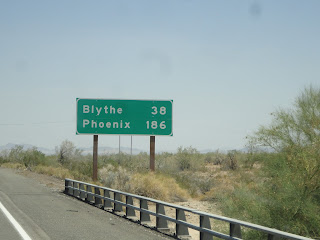 We drove 10 east all the way into Phoenix, then the 202, which I missed and had to turn around and try again. I got it the second time. Then streets to our next destination: Big Bro's, sis-in-law, nephew3, and nephew4's place. 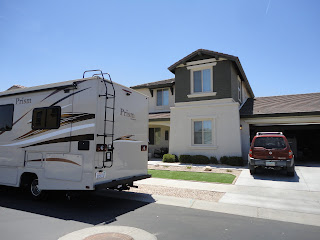 They have old man Ollie (Oliver the diabetic 10 year old dog), Benny (4 year old dog who is part beagle...so he talks a lot-we think Floofy puppy may have picked up a bad habit. Thanks Big Bro.), two kitties (Jaspurr and Jewels), and a cockatiel (Piper), so floofy puppy was super excited. He has never seen kitties before, and especially kitties that look like lions!
Ollie didn't care much for him, but he's old and blind, so all floofy puppy is, is a blur to him. Benny got a playmate that wore him out, and the kitties just wouldn't play, no matter how hard he tried to get them to. The humans enjoyed sitting in the backyard in the cool 85 degree evening, eating popsicles and playing cards. I won again. I think I have to be on vacation to win, I lose a lot at home.

The following day, Big Bro and nephew3 drove us up to Sedona. We couldn't find parking and so we pulled over to turn around and try again, and nephew2 needed to pee. So he got out and peed. He said it's really pretty down there. (more on that later) We walked around and looked at art and tourist shops and ate lunch and took the obligatory family photo's, much to the shugrin of all the nephews.


Nephew2 wanted to see the creek he saw when he peed, so we went off to his pee spot. The nephews climbed down close to the water where we (Big bro and I-because we were smart and didn't climb down) saw a hippie down in the water. Nephew2 got a good pic of the dude in the nude, not being lude by keeping his little dude submerged (nephew2 has that picture). 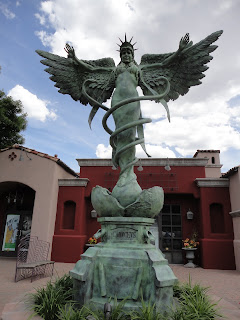 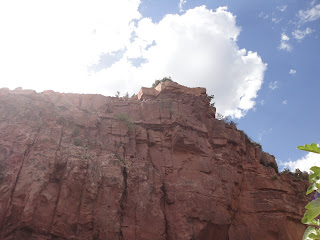 After seeing the snoopy formation and all we wanted to see and not see in Sedona, we went back south and stopped at Montazuma's Well. Down a dirt road of which nephew3 was finally happy that he was forced to drive his dad's 4runner and not his little miata. We got out and started down the trail to the well. Once there, the ranger was standing in the middle of the trail telling us the park was closing at 5pm so we only had 5 minutes. We were bummed and disappointed that we were only able to look at it and not get to explore it. We now know that the Rangers at Montazuma's Well want to start drinking early, so go early. 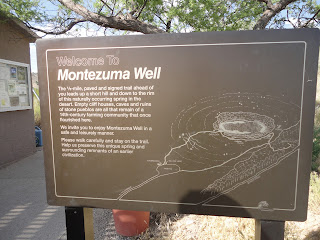 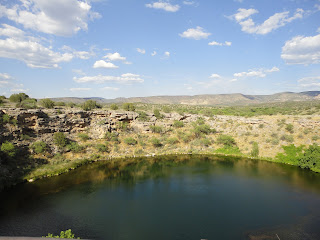 The next day was laundry day. Oh so exciting. Big Bro also chauffeured us around to the 3 Dude's Quilting store. It really is owned and run by three old dudes who were tired of their wives hanging out in quilt shops without them. 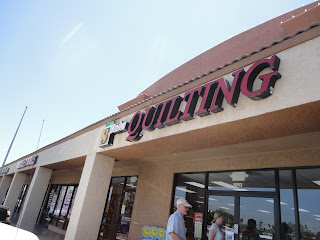 And a few other places for essentials that we forgot like razors and body soap. Necessities when you live in a RV with three other people. The nephews went go-cart racing, while us "adults" went essential shopping. They needed some more cousin bonding (they said this, not their parents) so after dinner, they went bowling. Why is it that it's always late the last night that we start talking deep intellectual philosophy and solve all the worlds problems? It's just how we roll. We're cool like that.

The next morning we were off on the next leg of the journey. The previous always not quite long enough, but always looking forward to what is coming up next. What a conundrum to have.

So until next time where we learn a new word for restroom, floofy puppy has so many firsts, it's almost mind-boggleing, nephew2 surfs in Colorado, and sis looses the keys to the RV.

Hang on, not so fast. Nephew2 has sent me an important photo: 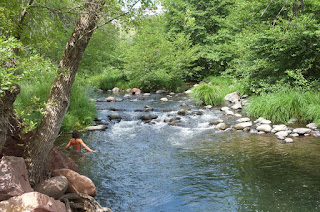 Posted by The Lonely Traveler at 8:42 PM