A few of you have asked what I have decided to do as my “reward” for hitting my weight loss goal. I talked about it here. (I haven’t quite hit it yet, but I am close) Well here it is in Technicolor! Part one is a hike I have wanted to do since high school. That was 16 years ago! Good grief. It is the Skyline to the Sea Trail in Castle Rock and Big Basin State Parks. It is 29.5 miles one way from the starting point in Saratoga to Waddell Beach. Big Basins web site says it will only take 6 hours to complete, once at the parks headquarters. It is usually a two to three day hike, depending on how many diversions we take. My crazy good friend from Santa Cruz (she really is certifiable) will be going along with me on the mini adventure. However we may have to wait till spring comes, for if there is too much rainfall, we won’t be able to cross creeks. May want to wait till spring also so that we can actually enjoy the ocean when we get to it. Too cold in the wintertime. Brrrrrrrrr. 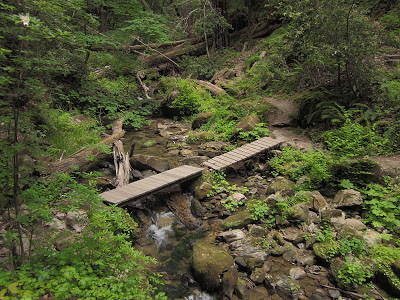 Part two is getting my passport renewed. I expired almost two years ago. I have been holding off on it partly because I don’t want it to have a “fat” picture, and partly to have it renewed as a reward to myself. I will reward myself by finally being able to leave the country! Who wants to take me to Cabo? Anyone? Ok, how about Saint Lucia? No? Australia? Chili? Ireland? It’s springtime in New Zealand!!

You people are no fun.

*according to Wikipedia there is an effort to connect the Skyline to the Sea Trail with the Bay Area Ridge Trail system.
Posted by The Lonely Traveler at 4:07 PM