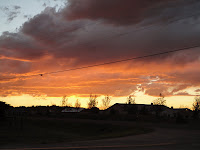 And so the sun has started to set on our adventurous road trip this summer. On Tuesday we went out to Uncle D’s house and had a very good dinner and some of his homemade wine! By Thursday we were packing up the truck with our haul because mom and pop were leaving for home on Friday. We played around a bit though too.
Miss Princess got a ride in the wheelbarrow courtesy of Longboarder 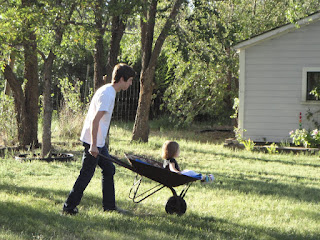 Then Longboarder wanted a ride. It didn't quite work out. 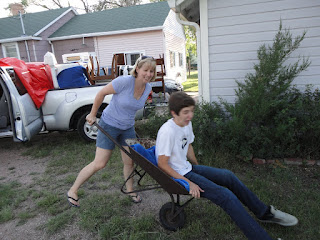 So Longboarder gave First born a ride instead. 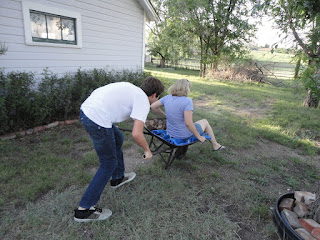 But then it was time to load up the truck. 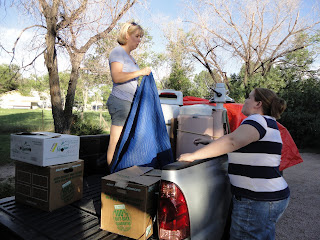 Amazingly we fit almost everything. Only things that didn’t make it in were 2 coffee tables and a chair that Grandma claimed. Not sure we will get that one back. Mom and pop said they will be going back to Cheyenne in September so they can bring back the stuff that didn’t make it this time. The poor truck when everything was packed in was a bit back heavy and slightly lopsided. 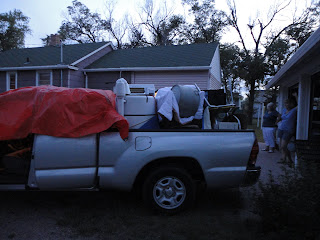 It made it back to California though with no problems.

Frontier Days had started so First born and I went downtown to the park to try and get in to see Young Cowgirl in the Junior Barrel Races. We got all the way to the arena before we got turned away. We saw it on Cousin Sweety truck driver’s phone. She placed 3rd! After being turned away, First born and I walked around the booths and shops and went down Wild Horse Gulch. I got put in jail. I swear it wasn’t me. It’s a conspiracy! 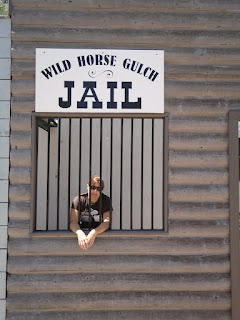 We watched the pee-wee stampede. Hilarious! 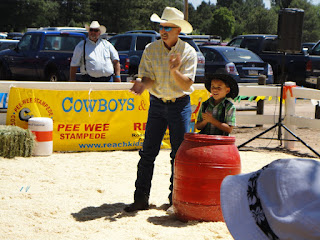 Went over to the Indian Village and got fry bread. Yummy! And then went back to Grandma’s. Saturday was spent just lolly-gagging around and playing games with Grandma. She may be 90, but she still wins almost every time! Gosh darn her!

It was time to leave on Sunday. We said our tearful goodbye to Grandma and saw her off to church, and then we headed down to Denver Colorado to pick up Miss my car and Longboarder who were visiting their dad over the weekend. We stuffed the car, quite literally. The guy in the starbucks parking lot in Denver was quite impressed. We headed out west on I-70 through Colorado and Utah.
Colorado 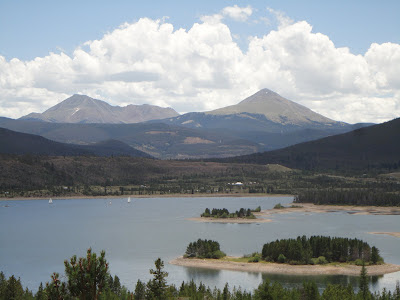 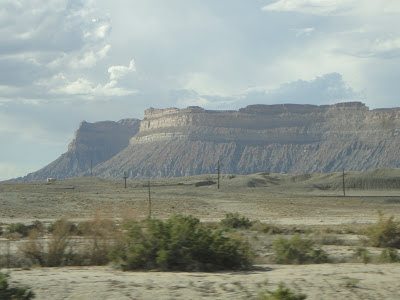 First born drove the day shift this time and I tried to sleep. We got to see a tornado in Utah. But don't worry we were far away. I didn’t sleep much at all, so I watched a 4 hour BBC mini series called North & South (not about the civil war). I took over driving duties at the Nevada Utah border. I only made it to Reno before I was starting to fall asleep. I woke First born up and asked her to drive us to Sacramento California, and then I would take over again. She ended up driving the rest of the way home.

When we pulled into the driveway, we all couldn’t wait to get out of that darned car. It really was like being packed into a plane this time. Within 30 minutes of our arrival back home, Longboarder had unpacked, showered, and was out the door on his board. Pop showed up with the truck to unload, and mom showed up in the car to bring back her stuff we had loaded into the truck. Miss my car left with mom to the DMV because he had lost his license and wanted desperately to pick up his car and drive it. It didn’t matter that he had just spent 20 hours in a car. We were zombies that day. But we all kept moving and doing stuff. We ate dinner at mom and pops, nothing special, but it was delicious. But that may have been the zombies talking. I slept like a rock that night. I woke up the next morning and don’t think I moved a centimeter in my sleep. It was super easy making my bed that morning.

The trip was great. Seeing family I hadn’t seen in decades was awesome. So glad I did my side trip to Chicago to see my internet besties, and the trip to Minnesota to see my childhood bestie as well. But I am so glad to be home.

I will leave you with this picture of the windmill behind Grandma's bunkhouse. 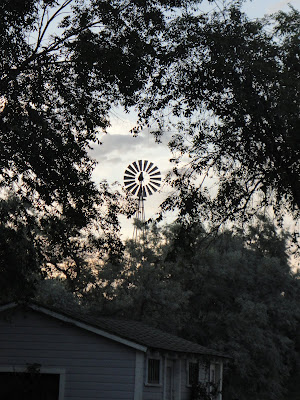 Posted by The Lonely Traveler at 7:14 PM