And so it begins. I came back from my mini (ultimate) road trip to find that my brother (Unfortunate middle child) and his boys Always Right and Chatterbox had beat me back to Cheyenne and had already moved into the camper trailer in Aunt P’s driveway. My parents (mom and pop) and First born’s oldest son (Miss my car) had also arrived. Pop’s clan had all arrived. 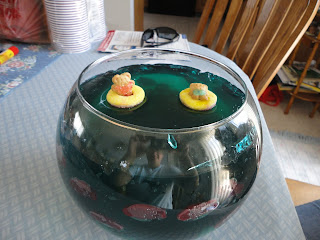 Does everyone have their life preservers on? We went down to Wellington Colorado again to Aunt J’s house to swim. We were soon laughing it up with Cousin Crazy (Aunt J’s youngest son) and his wife and daughter. His eldest couldn’t get out of work to make it.

Later that evening we all went out to Cousin B’s place for dinner and horse rides. Chatterbox fell into his element learning to rope and ride. We ate tons of food, and watched Cousin B’s daughter (young cowgirl) demonstrate barrel racing. Everyone got a horse ride, even the ones who were scared.

Cousin Crazy's lovely wife... she really is! And gosh darn it, she rode that horse! 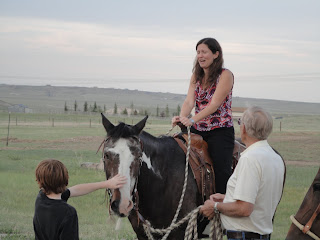 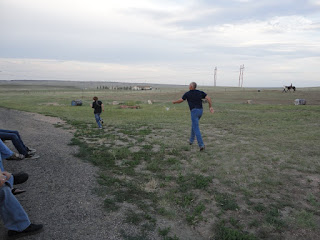 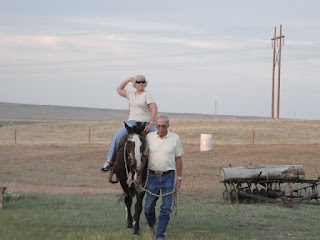 And I find a new friend with the barn cat 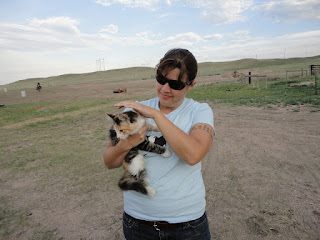 The reason we all gathered 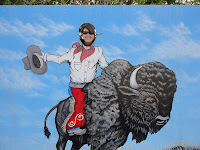 It was time for Grandma’s 90th birthday celebration. Granted her actual birthday was in May, but I think we have all decided to celebrate all year long. All of Grandma’s 5 children were in attendance, plus all of us cousins. It was the first time all of us had been together at one time since 1994! All nine of us! And all but one of the greats (14). We celebrated the big event at the Terry Bison Ranch. We ate buffalo burgers, sang songs, told stories, and listened to Grandma play her accordion. First born and I later got her accordion out, and Grandma tried to teach us to play. That thing is hard! It’s exhausting, don’t know how she can do it. We saw llama’s, camels, a really fat tom turkey, and alpaca’s at a bison ranch, who knew?
This llama was really hungry. 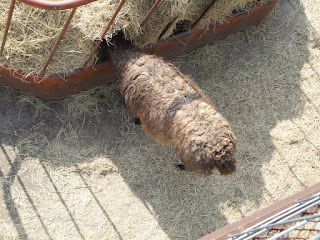 Grandma arrives back home in style. 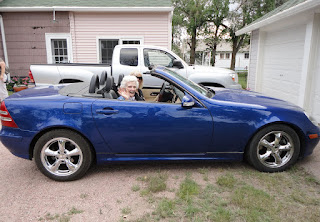 The next day the majority of us went out to Grandma’s house and just had fun. Playing hackie sack, airsoft guns, bow and arrow, and always chatting and laughing. If this family does one thing right, it’s laughing our asses off.

Cousin Crazy with a whip... this can't be good 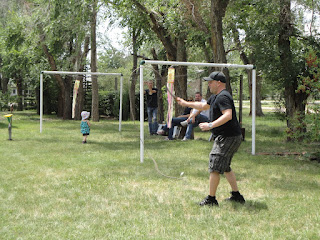 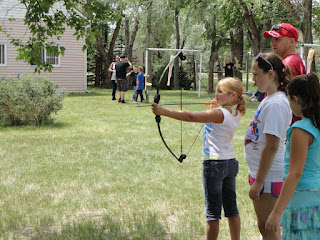 Miss Princess hamming it up 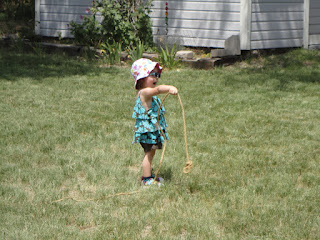 It seems that just as quickly everybody came, they all left again. It wasn’t long enough. It never is. By end of Monday, almost everyone was back to their respective homes or on their way. Cousin Army, Cousin Crazy, my brother Unfortunate middle child, Aunt S and all their offspring were gone. Goodbyes are hard. Tears were shed, we're good at that. Hugs all around, and lots of "just one more picture". But we (mom and pop, First born, Longboarder, Miss my car, and I) just won’t leave. Bwahahahahaaa

*wrote most of this waiting for Miss my car in Starbucks. He needed wifi like his life depended on it. And once again I am stuck waiting for Miss My Car, only this time he is taking a 40 minute shower. He has no hair! What is he... nevermind, don’t answer that.

Stay tuned for the next adventure involves dirty socks and is a real hum-ringer! HA, I crack myself up sometimes.