Just another reason I'm an outcast

It's the end of yet another Pride month, another year has past, and another time when I've thought, it's not my time to tell my story. Not my time to "come out". Well, maybe I should anyway. Is there really ever a "good time" for anything that may come back to bite you in the ass? No. So hello internet, it's me. What, you didn't know I was in a closet? Neither did I. 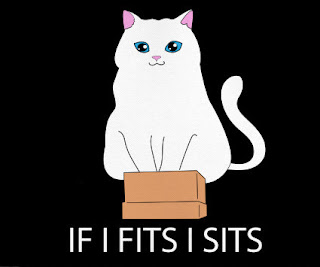 I finally figured out that I am asexual... about 2-3 years ago. I'm 42... and a half. I didn't know what asexuality was until about maybe 5 years ago. I never learned about it in school. Come to find out asexuality was still considered a mental disorder up until 2013 by the Diagnostic and Statistical Manual of Mental Disorders (DSM) published by the American Psychiatric Association. Dang. It was never talked about in any of my social circles. I never knew there was an actual scientific sexual orientation that I actually identify with. Look at me, look at me, I fit into a box! It's a tiny box. Only 1% of the entire worlds population are asexual. 1. One. ONE PERCENT. It's a tiny box, but if I fits, I sits.
Now coming out as Ace, as we call ourselves apparently, is no real big deal. I doubt I will be persecuted in any way for being Ace. We're known as the invisible orientation. We blend in. We are a small group. Majority of people don't even know we exist. I didn't for a very long time, see above. I see all these young people on social media being proud ace's and I'm so jealous. They know what they are. I knew who I was as a teen and young adult, don't get me wrong, but I thought I was somehow just so awkward and weird, and that I wasn't worthy or deserving of a "partner" was why I was 99% of my life single. I thought there was something wrong with me. God bless the internet.
These kids know there is nothing wrong with them. They're just ace. And eat cake.
Okay, let me explain, in case you are ignorant like I was. 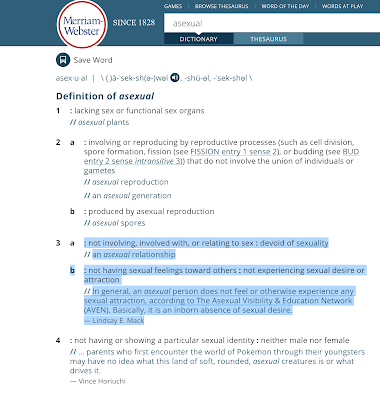 What does asexual even mean? Asexuality is the lack of sexual attraction to others, or low or absent interest in or desire for sexual activity. It may be considered a sexual orientation or the lack thereof. It may also be categorized more widely to include a broad spectrum of asexual sub-identities. These sub-identities are wide ranging from aromantics, grey-sexual, and demi-sexual, and can be across all spectrum's within the LGBTQ. You can be a gay ace, a lesbian ace, a trans ace, bi ace, or like me, a hetero ace, etc.
From here down, this is my life and experiences with being ace. Like stated above, there is a wide range of ace-ness, and this is just mine. So growing up in a christian religion that taught sex before marriage was a sin, I had no problem with abstinence. I had no desire. It just wasn't there. I thought, geez people it's not that hard, why you getting std's and making babies? I didn't realize I was wired differently then. Well, I thought I was to socially awkward to even attempt dating. I didn't realize I didn't want to date was because I just didn't want to. I never dreamed about getting married. Never wanted to have children. I don't have a biological clock. If given the option of sex or cake, I'll take the cake every time. 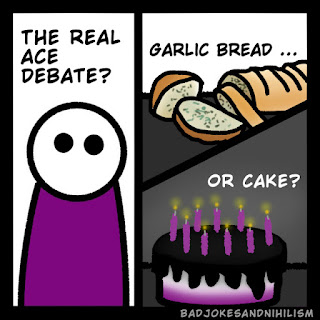 Ace's don't desire or even need sexual (and in aro's, romantic) relationships to feel whole or fullfilled or complete. And so in my youth and early 20's I even questioned whether or not I was even a heterosexual. Maybe I am lesbian? I obviously don't feel sexual attraction to guys. Maybe I like girls? No. I don't. I feel even less sexual attraction to women, if that's even possible.
I've had a total of two boyfriends. I'm 42, remember? Two. And I don't even think the first one should even count because we were in the 5th grade, and all we did was hold hands a few times and hang out at recess together and make fun of his best friend. The other one was in college. And I had to be told, quite bluntly, by several friends, that he was interested in me. And I tried so hard to be like hey look at me, I'm normal, see? Look I have a boyfriend, I'm not gay (yes I'm calling out my own ignorance here). I'm not weird. Look, I'm normal. I'M NORMAL! But dang was that hard. I had that one boyfriend for two years and that second year was spent in misery because I was too scared to break it off. Not scared for my safety or anything like that but I didn't think I had a legitimate reason. Oh younger me, if I had only known then that you don't need a reason at all. Looking back now, I can see why the entire relationship was so hard and all my flawed thinking. But I didn't know. I do now. And understanding and learning what my sexual orientation actually is is so liberating.
It was very similar to the feeling when I was medically diagnosed with depression. I knew I had it, but the validation from several medical professionals was freeing. A weight was lifted off my shoulders. I knew what I had, for realsies. Same with realizing I'm ace. My life made so much more sense. 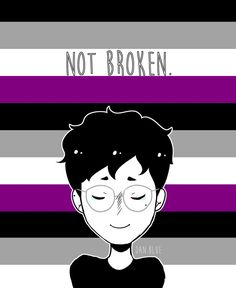 I'm not a freak for loving the fact that I'm alone. Ace's fill their needs for social human connections just like everyone else. We have friends. We just don't need friends with benefits. And no, it's not a hormone imbalance. It's not a fear of sexual intercourse. No, it's not painful to have sex. And no, it's not from a sexual trauma. It's not a condition. It is a valid, normal sexual orientation.
What I and other ace's get tired of is everyone else. Our society is extremely sexualized. You all are obsessed with it. It's everywhere. It's how most products are advertised. Sex sells. Isn't that the saying? Just watch any commercial or print ad. How are they selling the product? Wear this, buy this, drive this, eat this and whatever sexual orientation you're into will fall at your feet. Even products that don't push sex down our throats are still advocating or insinuating generally the heteronormative sexual lifestyle. And by that I mean, if it isn't selling you sex, it is selling you a sexual partner, marriage, a family with kids. If you're renting or buying a place to live and you're single, it is presumed it's a bachelor pad, temporary, until you meet your significant other.
You know what we really hate? The "Oh you just haven't met the right person yet". Pity. We hate pity. So sorry you're still single. Please. You have no idea how happy I am that I don't have to deal with any of that shit. You all are like, oh my god, I'm so sorry, you haven't had sex in how many days? Uh, try decades. I love the fact that I don't have to share a bed. I love that I don't have to depend on or be depended on for any type of sexual or romantic adoration, need, or desire.
But sex is everywhere in our culture. 99.9% of TV, movies, and even literature is sexual. If the two lead characters aren't together it's either because there is some sort of angst or they have other partners. All the supporting characters have partners or desire partners. If they are single, it's not because they are ace, it's because they have some sort of "flaw" that prevents them from having a sexual partner. I always found it so alien to me why characters were hooking up when they do in media. Why are they having sex right now? I don't get it. They haven't even solved the murder yet. They just met like 20 minutes ago! Now I get that it's just how you 99% think all the time. Do you not find it exhausting thinking about sex all the time? I mean, give it a rest. 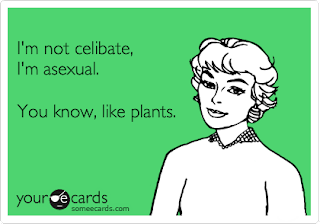 I'm happy that I am single. My life is fulfilled. I am a complete human. I never understood the "not a full person without your other half" thing. Like I'm somehow not a fully fleshed person unless I have a sexual or romantic partner. Screw that.
Now don't get me wrong, I can and do enjoy tv, movies, and books with sex and romance. It's been streamed into my eye holes forever. That is again 99% of all media. I mean seriously, how many books have you read or shows have you watched that had an ace lead character? Hell even an ace secondary character? I'll wait...
And before you ask me way to personal questions and you're actually interested in what I just said. Start here:
https://www.youtube.com/watch?v=R9tSal4YyII
Then we can have some conversations.
Last thing, the "A" in LGBTQIA doesn't stand for "ally". It stands for me.
So this socially awkward, middle aged, crazy cat lady is trying to wear her scarlet letter with Pride. Step one: step out of the closet and say hello.
Hello
Another video you may find interesting and entertaining is Anthony Padilla's series called "I spent a day with" https://www.youtube.com/watch?v=zW29J3nxjis
Posted by The Lonely Traveler at 2:23 AM

Thanks for putting some clarity on asexuality. I find your explanation helpful.

Sexuality, in its many flavors, seems to be a big part of many peoples' identities. But making sexuality, in any of its forms, the primary marker of our identity seems unwise. But then, there are many other secondary characteristics that also compete with that primary slot in our identity - such as our profession, intelligence, family, beauty, athleticism, wealth, and so on.

Hope you keep on writing.

Way to Go! Kelly. You are great just the way you are.