I know you've all been waiting with baited breath for me to finally finish the story. Well, sorry about that. Let's see if I even remember what happened. Where did I leave off? Oh bother.

The day after the Hail Storm of the week, we laid low. We went downtown and watched a horse auction, visited the Cheyenne quilt shops, and I watched my 94 year old blind grandmother play her organ. 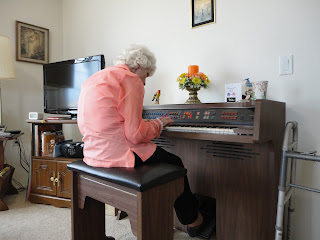 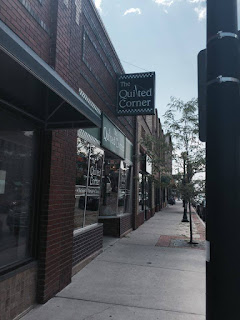 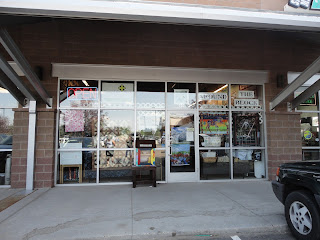 We went to Laramie to visit more quilt shops! On the way there we stopped at Vedauwoo and we walked around a bit. 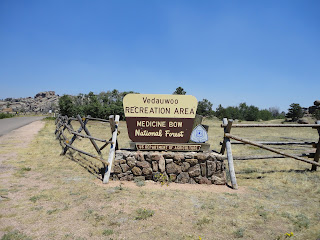 I love this place. It's a crazy geologic formation in the middle of the prairie.  The name is a butchering of the Arapaho word bito'o'wu which means earth-born. 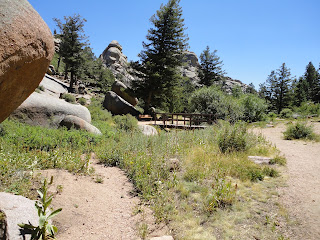 Once in Laramie we stopped at two quilt shops. 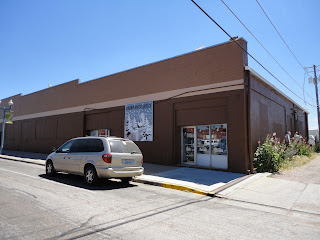 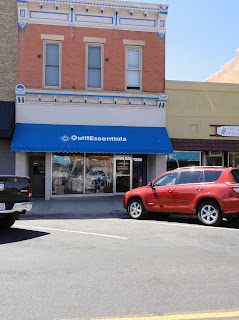 On the way back to Cheyenne we stopped at the Lincoln Monument. It used to be on the railway, but was moved when the interstate went in. 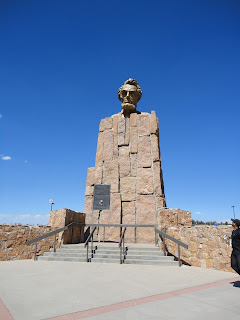 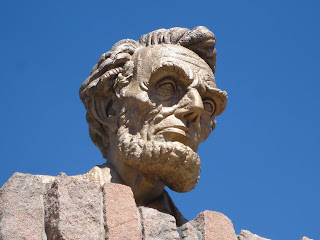 His head is oversized and of course I had to see if there were any boogers up his nose. We then stopped at the very strange Ames Monument. The Ames brothers (Oakes and Oliver) were wealthy railroad men who helped build the Transcontinental Railroad. However they weren't very nice guys, but of course their monument says nothing of that. 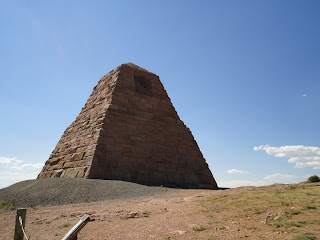 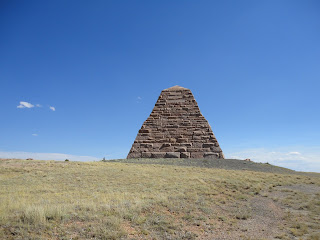 I only wanted to see it because the internet said the only interesting thing about it is the bird shit on the faces of the brothers and that the nose has fallen off of one of their faces. 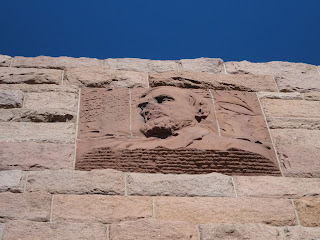 My Aunt P. remembers going to see it, and my dad said he remembers climbing in it. However, if there were doors or entrances, they aren't there anymore. Still, it's weird that there is a pyramid in the middle of the prairie.

The following day we went to watch our Cousins TnT compete in cow sorting and barrel racing. 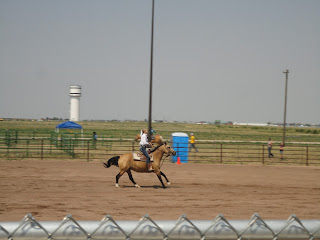 They were competing with FFA (Future Farmers of America), but the event was put on by 4-H. My cousin B (TnT's dad) was fuming about how unorganized it was and had to "take a walk". He came back with a proper glue gun and hopped into the corrals to properly put the numbers on the cows for sorting. We left a bit early and went down to Terry Bison Ranch because friend D wanted to go see the animals. It started out with a herd of bison. They now have all sorts of animals. Even camels! 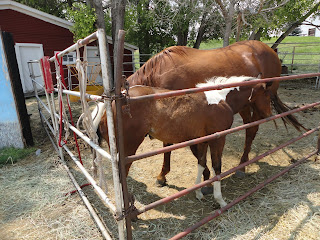 The following day we went south to Estes Park to spend the day with little Cousin D and the girls K.D. and E.G. Now Estes has a famous hotel. The Stanley Hotel where The Shining was filmed. We had a nice view of it from the (you guessed right) Mexican restaurant. 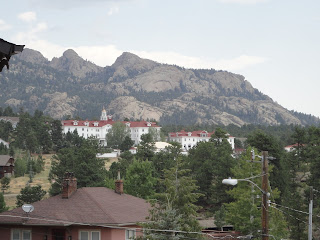 We also saw some ruins from the restaurant and had to go find them. Ended up being an old homestead. 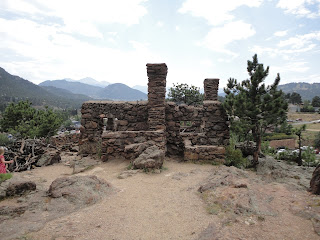 Guess what Estes has as well. You guessed it. Quilt shops! Two of them! 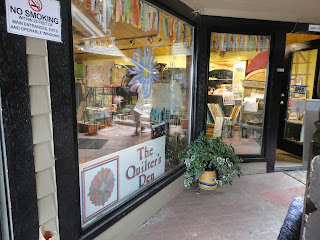 We decided that my mom would have loved this particular quilt shop. We were given tea when we walked in and they had all sorts of things that my mom had collected over the years. 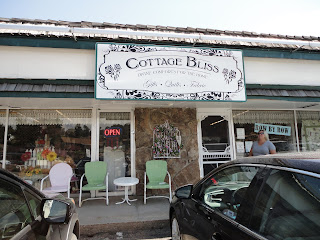 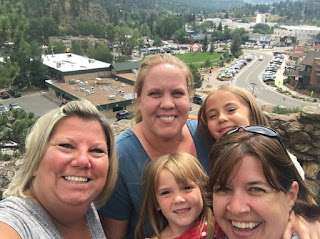 The next day we went to Grandma's house. The family is cleaning it out to get ready for sale. It was bitter sweet. Seeing it one last time. Seeing it in such disrepair. It had been Grandma's home for almost 70 years. It's just one more big change, milestone, the world keeps spinning moments. So we took a few bricks, rocks from her rock pile, and a flower pot, so we could have a piece of the home. 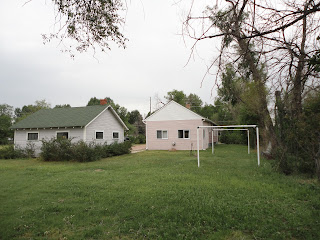 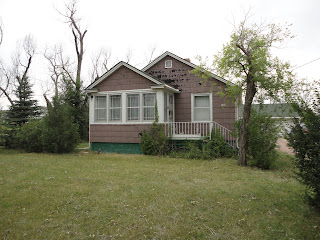 After shedding some tears at the house, we went out to Uncle E's house because friend D wanted to ride a horse, and Uncle E has horses. We had a quick dinner, and then K.D. and E.G. got to ride Scoot the horse. 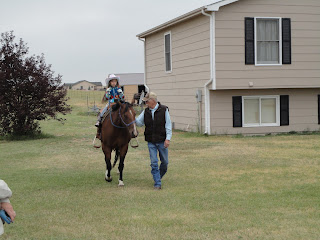 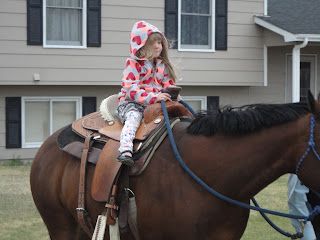 And then it was friend D's turn. There's hilarious video on someones phone of her getting on Scoot. But I don't have it, and I'd probably be shot if I posted it. She got a short ride before Scoot decided he didn't want anyone on him anymore. 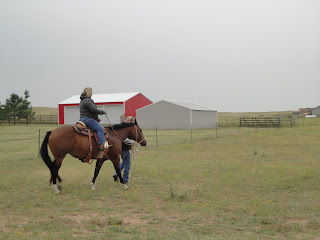 Friend D was no longer on Scoot. Scoot was pissed, Uncle E and friend D were on the ground, and Aunt P, sis, and little Cousin D were running. We spent the evening in the best E.R. I have ever seen! No broken bones for friend D, but severe bruises. We were concerned about how we were going to get her home. We were supposed to leave for home the following morning. We got her to Aunt P's, drugged her up and put her to bed. We packed up SueBee that morning, got friend D in it and went to the pharmacy to get her prescription. Well because it's a "controlled substance" Wallgreens had to "hold" it for 2 hours. So we tried the E.R. pharmacy and got it filled in 15 minutes! Yay drugs!

So we popped a pill in friend D every 4 hours all the way back to California. So no side trips to quilt shops or the archaeology site I wanted to see or the wild horse preserve. Just drive, drive, pop pill, drive, drive, stop to pee or eat, drive, drive, pop pill. Little K.D. and E.G. got me a little hedgehog, so she became our co-pilot. I named her Hetty the Hedgehog. 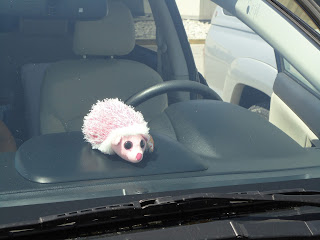 The last picture I took was this one of the obvious Star Wars fan road sign that didn't want to get sued by George Lucas. 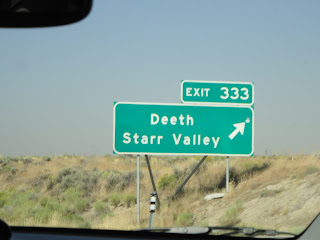 We got friend D home safely and plenty drugged. Her husband just shook his head. Then dropped sis off at her husbands place. His family was all there and they tried to feed me. But I declined, but did show his nephew and niece SueBee's hail damage. They got a kick out of that. I then drove the rest of the way home alone. I drove through my childhood neighborhood in San Jose just because and freeway traffic avoidance. I don't miss it. What I will miss is Grandma's house.

Posted by The Lonely Traveler at 11:50 PM