While idling after My Peak Challenge ended this past March, I was searching the internet for something to do physically. I didn't want all that work to go to waste. And I was coming down off of a high and sitting on my ass instead of working out. I needed a new goal to reach. Something to commit to that would keep me focused and working out. A few things happened. I found that climbing California's 14ers (peaks over 14,000 ft) scared the crap out of me, especially when people started mentioning ice axes and ropes. Summiting California's volcanoes (20 of them) sounded much more doable, and only one of them, Mt. Shasta, is also a 14er. And a Facebook/twitter group that I joined during My Peak Challenge decided to do a new "challenge" for May.

So, it is mid May now, and I am almost half way done with the May challenge. I'm on track! And this past Sunday I and my cohort completed our first volcano summit. Our adventure is as follows:

Balls! After mentioning on facebook my idea of climbing all of California's volcanoes, only one person said she was totally down with doing it with me. Crazy, I know, only one. I asked if she was serious, and low and behold, she was. She is fascinated by profanity and uses the word balls as a swear word. Although her favorite word at the moment is dick, I will stick to calling her Balls. Balls lives in Santa Rosa. For those of you not from California, it is north of San Francisco by about 55 miles. While researching which volcano to do first, I decided we'd best go for the closest one first. That happens to be Mount Konocti on the shore of Clear Lake in Lake County.
Here's a quick blurb from the USGS: Clear Lake Volcanic Field is located about 90 miles north of San Francisco, California. The town of Clear Lake lies within the volcanic field as does much of the 43,000-acre fresh water lake of its namesake. The Geysers steam field, which sits at the southwest margin of the volcanic region, is host to one of the world’s most productive geothermal power plants, producing enough electricity for 850,000 homes. The heat driving the geothermal system emanates from a zone of partially molten rock (magma) deep below the greater Clear Lake volcanic system. The most prominent volcanic feature is 300,000 year-old Mount Konocti, rising about 975 m (3,200 ft) above the southwestern shore of the lake. The most recent eruptions occurred about 11,000 years ago around Mount Konocti. Although Clear Lake volcanic field has not erupted for several millennia, sporadic volcanic-type earthquakes do occur, and the numerous hot springs and volcanic gas seeps in the area point to its potential to erupt again. Monitoring in the Clear Lake region by the USGS and a collaborative effort with Calpine Corporation in the Geysers Steam Field, provides real-time tracking of earthquake activity. In addition, the USGS periodically analyzes volcanic gases and hot springs in the region.

I drove up to Balls' house Saturday night, forgot my phone, left it charging in the wall, and slept on Balls' couch. Woke up with her roommates dogs face in my face. Sunday morning we drink coffee. Coffee is important. We go to Whole Foods for snacks, and then leave for Kelseyville, where Mt. Konocti awaits us. We drive into town and turn down a road that turns to dirt. There is no signage telling you that there is a county park at the end of the road, let alone a freaking VOLCANO! Lake County is severely lacking on proper signage. This you will note is a frequent subject while Balls and I were on the trail. Balls was also somewhat shocked that I had an actual camera. Even if I hadn't forgotten my phone, it isn't a "smart" phone. So yes, I'm old school and carry an actual camera.

Mount Konocti is made up of five peaks (Howard Peak 4,286 ft, South Peak 4,286 ft, Buckingham Peak 3,967 ft, Clark Peak 2,880 ft, and Wright Peak 4,2999 ft). There are no trails to Clark or South peaks. Much of the area is private property. We hiked to the top of Wright Peak, which is the highest. There was a sign for the fork to Buckingham Peak, but there was absolutely no sign, post, or marker telling you that the road on the left would take you to Howard Peak. We saw it just fine from the top of Wright Peak anyway. Apparently Lake County decided having bathrooms, picnic tables, and benches everywhere was way more important than say a water spigot or proper signage telling you where the hell you are. Thank the spirits both of us printed out the crappy trail map and I had my pilfered GPS unit. Someone left it where I work and never came back to claim it. It sat in our backroom for a year. So, I'm sorry, I'm going to take it and use it. Balls was getting worried that she may not be able to make it up to the top, so we stopped at some of the many random benches for some breathers. 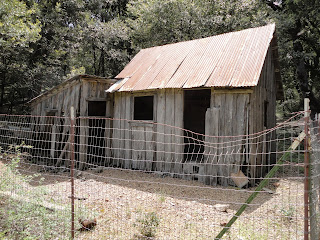 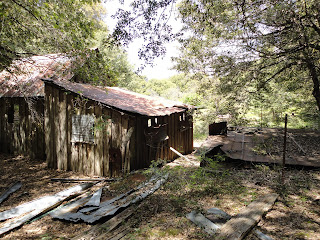 We finally made it to Mary Downen's cabin. Who? And why did she build a homestead on the side of a volcano? Well, once again, the signage wasn't great here. Apparently in 1903, a year after her husband died, her son-in-law Euvelle Howard (as in Howard Peak) took her up Mount Konocti on horseback and she fell in love... with the mountain. She staked a claim and paid a whooping $600. A cabin was built and she began homesteading... alone. There is no streams on the mountain and eventually she had a cistern built and her son-in-law Euvelle planted her orchard. Apparently her son-in-law moved up there. Balls and I debated why her daughter didn't move with him and talked endlessly about them most likely having an affair, but that kind of wigged us out. Ew. Euvelle is apparently buried near the homestead. The crappy signs say he is buried 500 ft from the cabin with a large "obvious" boulder with his name and dates carved in it. They even provide waypoints. But there is no path. So we plug in the waypoints into my pilfered gps and off I go uphill, off trail, looking for the "obvious" boulder. I never found him. Why the hell tell people he's up here and all and then not provide a way to actually get to him?? I don't get it. And why is he buried here and not Mary? What ever happened to her? We have no idea. We had to look her up on the internet during dinner. Found where she is buried. She's in Lakeport and shares her husbands marker. So she was buried on top of him, or next to him. I don't know. There is hardly anything about Mary on the internet. It's all the same little bit on every site we could find. She seemed like a very interesting person. Who decides to homestead on a volcano as a widower in her 50's in 1903? She sounds awesome. I want to know what happened to her. How long was she on the mountain? Where's her privy? How did she die? There is nothing! Now, there is obviously some archaeological records out there on her homestead. They fenced off her cabin and dump and there are pin flags everywhere. So those of you who still have access to CHRIS can maybe help a girl out?? Yes?
Anyway, we walked through Mary's orchard debating what kind of trees they are. Again, no signage saying anything about that. I said fruits, Balls said nuts. Of course she did. I think we were both right. We got eaten by mosquitoes, so dicided to get back up on the trail to our summit... after a pit stop at a random bathroom and picnic table. 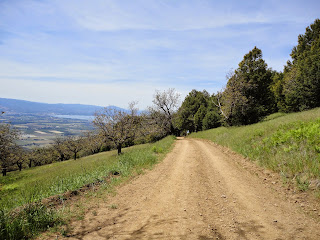 We made it to the summit of Wright Peak! Great views. Top of the world... or Lake County anyway. While I was taking this pic of Balls, she took this one. 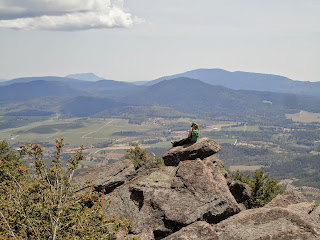 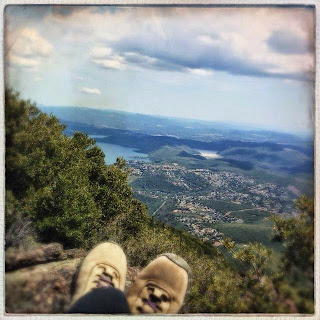 There is a fire lookout and cell tower on the top. The fire lookout was closed in 2005, technology and all that made it useless to stick a person up there 24/7 during fire season. There are some interesting stories about this mountain/volcano but I will spare you. I will say that I'm impressed that the Pomo name for the mountain remains. As with most of the history of white settlers, army, and Indians, things did not go well for the Pomo and Wapo that call this area home. 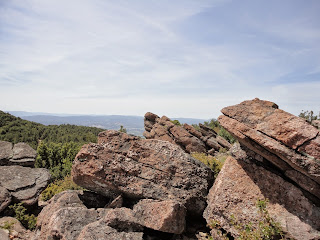 Our experience of Mt. Konocti has only wetted our appetite for more volcanoes, despite us being in Lake County and their lack of trail signage. We realized that both of us have forgotten much of our botany skills and need to brush up on them, not that we had any to begin with. And we need to do more pre-field research and learning before our next volcanic adventure. So 1 down, 19 to go.

Posted by The Lonely Traveler at 5:51 PM