Trekking: Skyline to the Sea Day 1

Saratoga Gap (the intersection of hwy 9 and hwy 35 in Saratoga California) to Waterman Gap trail camp. Total of 6.4 miles. 7 for us because we started on the wrong trail. D’oh! Face palm!

I got to My life is Chaos’ house in Santa Cruz around 9:30am. Her husband and wild child dropped us off at the wrong trail head, which I thought was the right trail head by 11:00-11:30am. After of course we had to first go to New Leaf market (super hippy grocery store that you only find in places like Santa Cruz) because she hadn’t had breakfast yet and husband needed coffee and she had eaten the chocolate for the trail already. Then after wild child's second coconut water, realized she had forgotten to pack the apples and carrots for the trail. So back to the house of chaos. Finally on the road, up hwy 9.

Got to the intersection of hwy 9 and 35 and thought there would be some sign or obvious trail head at the obvious parking lot, but nooooooooo. Chaos’ husband needed a cigarette by then, so parked there and let us loose. So here is us at the wrong trail head. See how happy and clueless we are? 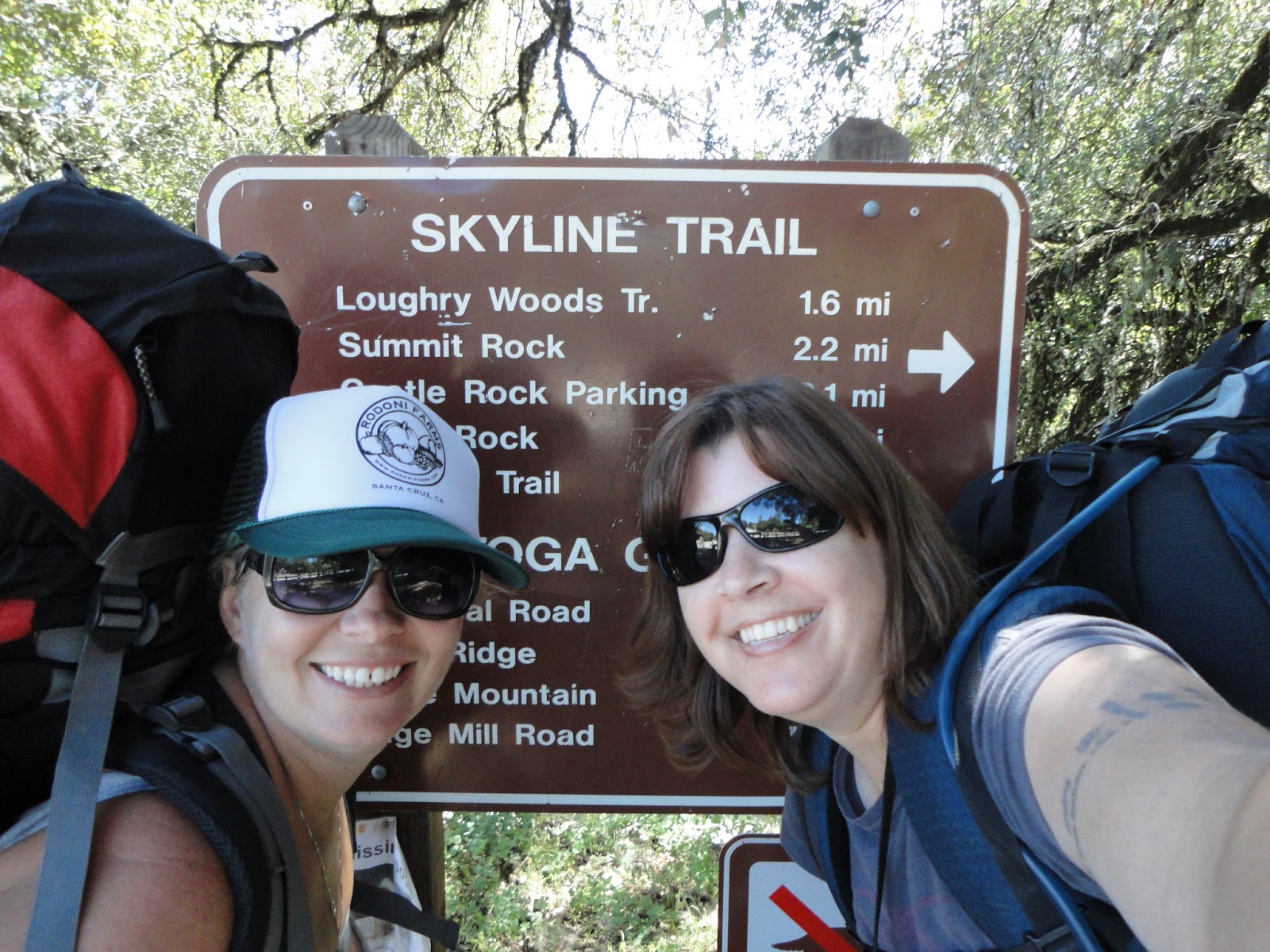 After a bit down the wrong trail, Chaos needed to pee and kept saying “this doesn’t feel right, I think we are going the wrong way”. Fine. After her first squat in the woods I got the map out and sure enough... wrong trail. Went back up the trail and back out to the parking lot, crossed hwy 35 and started walking down hwy 9 and saw the right trail head sign. Here we are at the right one. Yay! 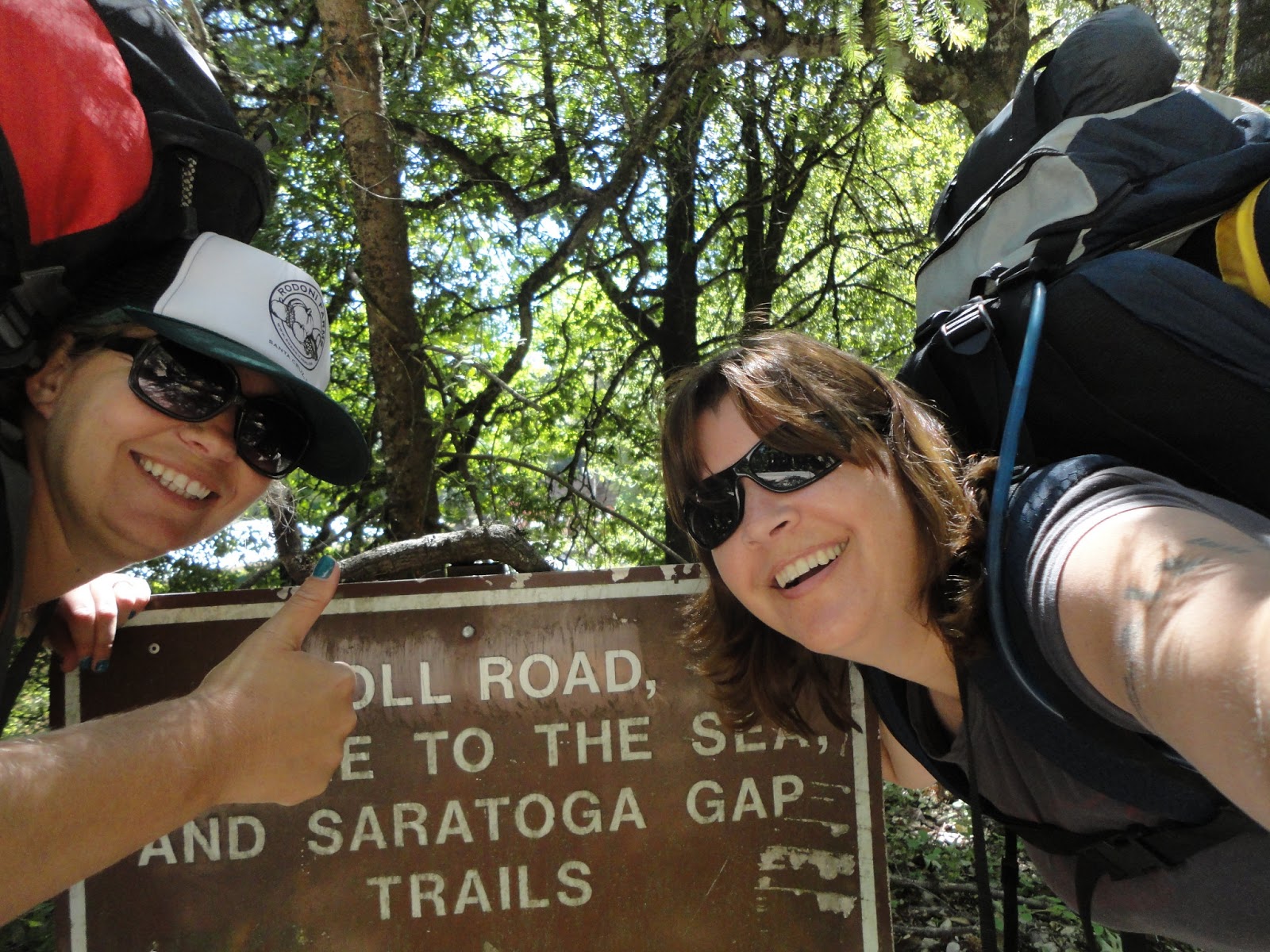 Almost the entire first day was next to hwy 9 and crossed it several times. Only saw two day hikers. We stopped for lunch at the Sempervirens (have you googled this yet, Chaos?) Point lookout. Which was not quite our first day halfway point. A lady came by and asked us where the entrance to Castle Rock State Park was (we were in Castle Rock) and I felt really proud of myself when I busted out the map and knew where we were and where she needed to go. Boo-yeah.


Made it into Waterman Gap Trail Camp by 2pm. 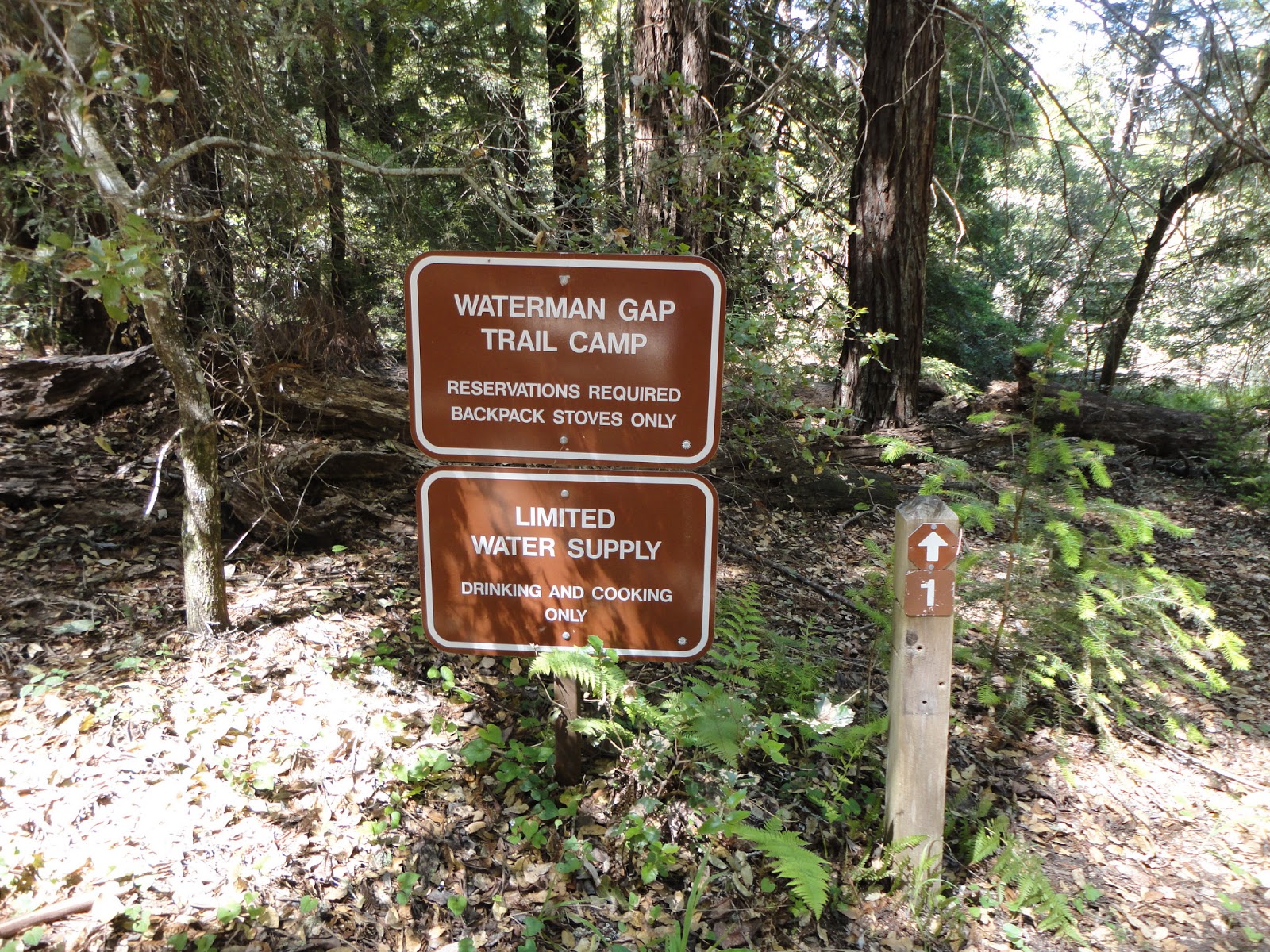 There was only one other person there. Ms. Chaos said we should go talk to him in case he was a serial killer. Because apparently if you talk to a serial killer, he is less likely to serial kill you. Ok. He told us there was a camp site down the hill if we wanted. We went down there and saw this: 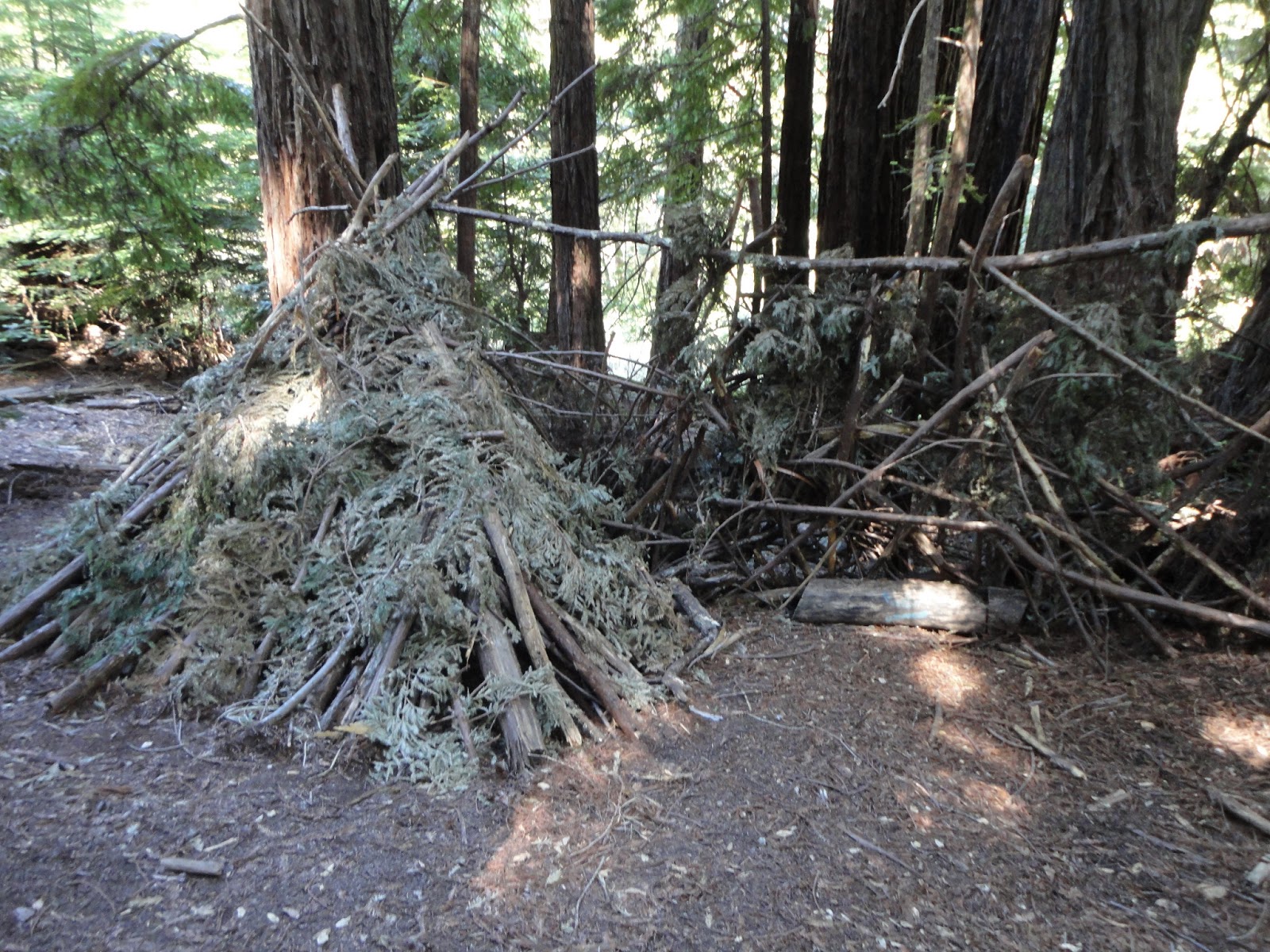 Chaos decided it was made by meth cookers and that she will not sleep anywhere near it. So back up the hill to where we initially decided to set up camp. Our potential serial killer was listening to the Giants game on his radio. After talking with him, we decided he was not a serial killer and just a short, retired IT guy who loves gadgets and gizmos. He is training for a 21 day backpacking adventure with his daughter on the John Muir portion of the Pacific Crest Trail. He is out “testing” his equipment. You go, little IT guy!

We set up the tent, no problem. Got the cook stove out and hooked up the little propane tank and got dinner started. Gourmet dinner of ramen noodles! I bumped the stove and spilled all the ramen and water out. Oops. Luckily, Chaos had packed extra. So started over with new water and ramen noodles. After dinner, little IT guy came over and showed us his cooking equipment and what he had for dinner and told us about the raccoons. I knew that raccoons would get into our food if we didn’t properly store it. He suggested that we put it in the bathroom. It was the cleanest bathroom ever, just didn’t have any toilet paper. (Chaos brought a role though, so all was right with the world) So we did. He also put his bear box in there too. He said he didn’t want to hear the raccoons scratching at it all night. He has a gadget to repel raccoons, by the way. Ok.

By 6pm, the mosquitoes were so bad that we retreated to the tent. The Deet was not working. Not knowing what to do with ourselves at 6pm inside our tent, we were both close to sleep by 7pm. How sad is that? Not even dark, and Chaos is snoring.

The first day wasn’t too bad. Our backs were sore from the packs, but my feet and legs felt good. Saw two banana slugs, heard the raccoons and some deer once it got dark. I would sleep for maybe an hour or two and then wake up, re-adjust, and sleep another few hours and wake up again. I did not get cold though. I always get cold when camping. That was the one thing I was most paranoid about this entire trip, was being cold at night. But it was all good. Even after I had to break out of the cocoon in the middle of the night to go relieve the bowels. Yay!

Day 2 coming soon: where Chaos gets a name change and tries to throw me off a cliff.

Enjoying the great outdoors is one of life's pleasures, and this site is full of information to help you make the most of it.