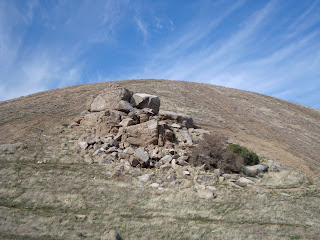 Winter in the high desert is actually quite nice. I'm in Lancaster which is considered in the high Mojave Desert. Joshua Tree's, greasewood, cholla, buckwheat, and creasote abound. The snakes are still underground hibernating so you don't have to worry about venom bites. The fiddleneck and other pokey sharp plants are not so pokey and sharp yet. The grasses are turning green and aren't tall past your knees yet. The poppies aren't out yet so there aren't a lot of stupid tourists around stomping on them all. It is very cold in the mornings and evenings, but it is almost t-shirt weather by noon after you have been walking for a few miles.

I'm here in the desert working on what we call a Road Story Survey. Basically we are walking already existing roads or new proposed roads to be built to access transmission towers that are or will soon be built. This is not my project, which means I am not in charge. I like it. I'm acting more like a field crew chief rather than a supervisor. It is a nice change. I don't have to worry about the money, or plan out the days, who's going where, which vehicles, do we have enough vehicles, so-and-so needs this, so-and-so needs that. No running around like a chicken with it's head chopped off. This job is actually enjoyable for the most part. We were staying in what most people would consider a crappy hotel the first 4 nights, but after being in Taft for 6.5 months where the best hotel had a cockroach problem and a recovering meth addict for a hotel manager, a crappy yet clean hotel is quite nice. I think my standards have been severely lowered. I'm just happy to have clean sheets without unknown stains and cig. burns. 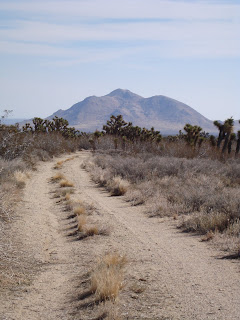 One unfamiliar with the desert may think that there is not a whole lot to see out here and think that people way back when would not chose to live in a place like this. But in reality, even though this is a very harsh environment, life abounds. And in this particular area, not to long ago there was plenty of water. It was only when us genius Californians decided to farm the heck out of the area did the water table drop so far that now it is almost impossible to drill a well deep enough to find water, hence now getting water for agriculture via the California Aqueduct. Human occupation of the area reaches as far back as some of the very first (what we call) paleo-indians. Meaning soon after the little ice-age 15,000-20,000 years ago, people were able to migrate here. That is freakin' old! And just to add icing to this black dirt cake, under this human occupation are fossils from when us primates weren't even primates yet(I'm talking millions upon millions of years old)! How cool is that?

It looks as though I may be spending quite a bit of time down here and farther south into the land known as Los Angeles for much of this year. And although the archaeology is interesting and that I actually enjoy the desert, I don't want to be down here all the time. I would like to actually spend time living in my house and not just visiting it on occasion a few times a month.
Posted by The Lonely Traveler at 9:57 PM